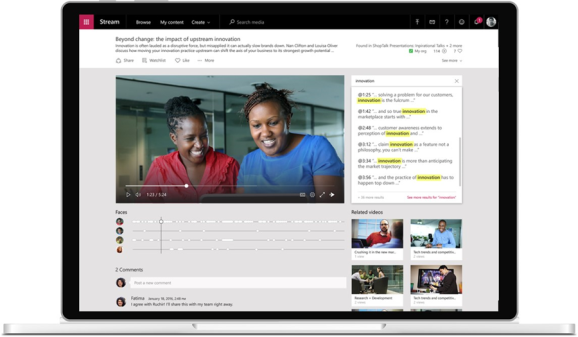 Microsoft is making it easier for companies to share videos internally with their employees, starting with the launch of a service today. It’s called Microsoft Stream, and it’s ready for prime time after nearly a year in preview.

One of the key new features that comes with this release is the addition of automatic transcription and face search, two intelligent capabilities powered by Microsoft’s cloud platform.

The features are designed to assist employees in finding the videos they need, according to Vishal Sood, a group program manager at Microsoft. While Stream makes it simpler for people to add metadata like tags to videos, the AI features make it easier to find the right footage without human intervention.

The launch is a move by Microsoft to make the sharing and viewing of videos within businesses as easy as using sites like YouTube. Businesses are increasingly producing video content, and Stream should help make it easier for people to find and view it without having to sift through a difficult-to-navigate portal.

Stream was first announced roughly a year ago. Since then, more than 100,000 users have joined the service from over 11,000 organizations. There are going to be many more users coming on board now that Microsoft plans to migrate all users of Office 365 Video to Stream.

Starting with Tuesday’s launch, IT administrators will be able to opt in to migrating their footage from Office 365 Video into Stream, Sood said. Once Microsoft has more successful migrations under its belt, administrators will instead have to opt out of the migration. Sood expects that the majority of, if not all, Office 365 Video users will be migrated to Stream by the end of this year.

Microsoft will also let businesses subscribe to Stream on its own, using one of two plans. The first offers all of the basic features, including video storage and sharing, for $3 per user per month. Paying $5 per user per month will get companies all of that, plus the speech-to-text and face-search features.