Tobii has popularized its eye-tracking technology by enabling gamers to control computer games with their eyes. And today, the company’s sister division Tobii Pro is extending that technology to track eye movements in virtual reality headsets.

Tobii Pro has integrated its eye-tracking technology with the HTC Vive headset. Now it can be used to conduct eye-tracking research within immersive virtual environments.

The tool comes with the Tobii Pro software development kit (SDK) for research applications. Researchers can collect and record eye-tracking data from a VR environment with pinpoint accuracy and gain deeper insights into human behavior.

Eye-tracking research in immersive VR is transforming how studies can be conducted and opens up entirely new possibilities in psychology, consumer behavior, and human performance. Through VR, researchers have more control over a study environment, which allows them to run scenarios that previously would have been too costly, risky, or difficult to conduct in real life. 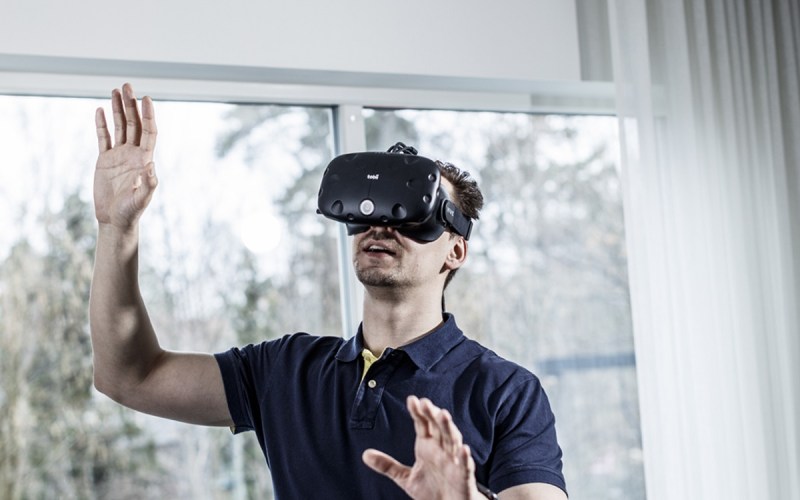 Above: Tobii Pro says eye-tracking VR can be used for a wide variety of research.

“Combining eye tracking with VR is growing as a research methodology, and our customers have started to demand this technology to be part of their toolkit for behavioral studies,” said Tom Englund, president of Tobii Pro, in a statement. “The Tobii Pro VR Integration is our first step in making eye tracking in immersive VR a reliable and effective research tool for a range of fields. It marks our first major expansion of VR-based research tools.”

For instance, researchers can get more insights into shoppers by getting them to look at store shelves in a VR environment. The researchers can move around different items on the shelves and see which order of goods attracts shoppers’ eyes the best. Doing such research in VR is a lot less expensive than doing it in a store.

Researchers can also study anxieties, phobias, and post-traumatic stress disorder (PTSD) in entirely new ways where they can fully control the visual stimuli, such as spiders or stressful situations, and regulate the experience in a safe environment without putting the participants in serious distress.

Tobii Pro also said you can test skills such as surgery procedures in virtual operating rooms.And you can get an unbiased look at what drives decision making and reactions in the virtual world.

“Eye tracking in immersive VR will open up opportunities for new ways of evaluating research questions that leverage the ability to control the environment, and the net gain for researchers will be stronger insights that will be more predictive of real-world behaviour,” said Tim Holmes, director of research and development at Acuity Intelligence and Honorary Research Associate at Royal Holloway, University of London, in a statement.