Holographic tech startup 8i is launching its Holo mobile app, which enables you to add 3D holograms of people and animated characters into your real-world photos and videos. You can, for instance, take a hologram of Spider-Man and add him into the background of one of your smartphone photos. You can also stitch moving holographic characters into a video.

8i launched the app on iOS and Google Play at VidCon 2017, a big trade show for vloggers in Anaheim, Calif. The company also partnered with media companies such as Sony Pictures to bring engaging content into Holo. For instance, Holo has a collection of Spider-Man Homecoming movie holograms to promote the upcoming film and to get users engaged with the app.

“People are creating, augmenting, and sharing content like never before directly through the cameras on their phones,” said Steve Raymond, CEO of 8i, in a statement. “With Holo, we’re introducing a new way to create and express yourself using holograms of real people combined with the AR capabilities of smartphones. Until now, it’s never been possible to direct your own videos using recognizable characters and celebrities, and we’re seeing lots of creative storytelling from Holo users. It’s fun to see what people come up with.” 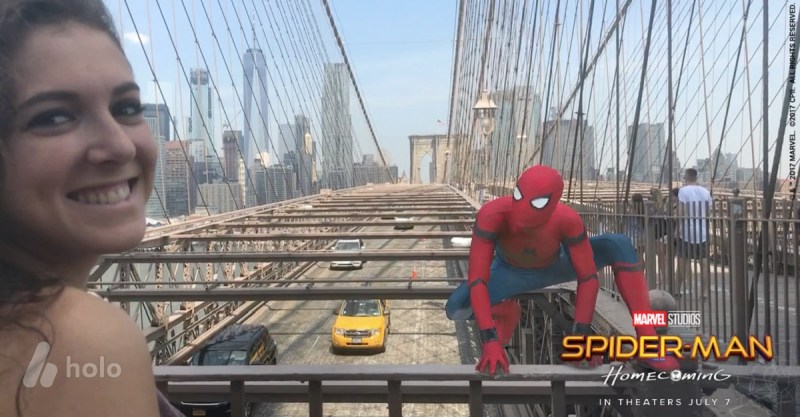 Above: Spider-Man is a hologram in 8i’s Holo app.

To use Holo, you add a character into the camera view, start recording, and the holograms will appear as if they are there in real life.

Holo will regularly release new hologram collections featuring movie characters, memes, athletes, musicians, and original characters with poses to personify every mood and reaction. You can shoot a video with Spidey from Spider-Man: Homecoming, in theaters July 7. He can do flips down your street, face palm on command, and pose heroically for a selfie.

“We’re thrilled to be a launch partner for Holo,” said Elias Plishner, executive vice president at Sony Pictures Entertainment, in a statement. “Now, you can send your friends images of yourself hanging out with your friendly neighborhood Spider-Man. It’s a fantastic way to get excited for the movie.”

At VidCon, where Raymond will be speaking on June 23, conference-goers will be some of the first to experience the new app as part of the go90 Holo experience, created by RYOT Lab in partnership with 8i. Fans can take photos and videos with holograms of favorite go90 stars, including Caleb Marshall (a.k.a. Fitness Marshall), Kenny San Jose (Boy Squad), and Jeremy Shada (Mr. Student Body President). The go90 collection is also available in Holo.

Holo is powered by 8i’s proprietary technology, which transforms video of human performances into 3D holograms that look real and can be viewed from any angle. Once the performance is volumetrically captured, holograms are easy and fast to create and publish on Holo. Wellington, New Zealand and Los Angeles-based 8i was founded in 2014 and has raised money from Hearst Ventures and Verizon Ventures.