Neoway, which provides data and analytics to companies in Brazil, announced today that it has raised $45 million to expand into the U.S. QMS Capital led the round, with existing investors Accel, Monashees, and Endeavor Catalyst joining. New investors include PointBreak and Pollux.

The company, which is based in Florianópolis, Brazil, helps clients manage sales by aggregating and curating massive amounts of highly detailed information about prospective customers and a range of markets. Neoway uses more than 3,000 databases from 600 different sources, according to a statement. It’s kind of like LexisNexis meets Tableau.

“Companies don’t necessarily know who they are selling to so they need intelligent data to better target their outreach,” said Neoway founder and CEO Jaime de Paula, in an exclusive interview with VentureBeat. “We collect public data from different sources that suit different purposes.” 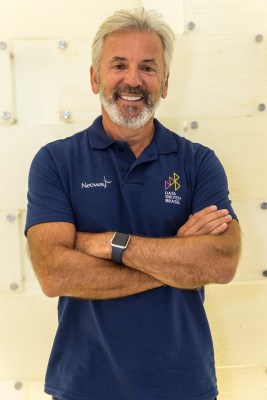 Above: Jaime de Paula, founder and CEO of Neoway

The company gathers information from the Transportation Agency, for example, which provides details on all trucks owned by companies in Brazil. “With that information, Raizen and Shell can sell fuel to potential customers, and banks can collect bad debt from potential asset recovery,” said de Paula.

Neoway uses bots to crawl the web and find actionable information. The company collects 95 percent of its data from public sources and 5 percent through partnerships. De Paula claims to have more than 400 customers — who pay a subscription fee to access the service — including Telefônica Vivo and the Brazilian operations of Unilever and Microsoft. In addition to providing intelligent data, Neoway has integrated with Microsoft Dynamics and aims to be available on Salesforce later this year.

The company has already paved the way to a U.S. expansion by opening an office in New York earlier this year and partnering with data provider Infogroup. According to de Paula, Neoway has already collected data from 50 million companies in the U.S. and has set up two pilot programs — one with a leading financial institution and one with a leading consumer goods company.

Neoway was founded in 2002 by de Paula when he was working on his PhD thesis at Universidade Federal de Santa Catarina. “Getting funding back then wasn’t as easy as it is today in Brazil,” he said. “But so many startups are launching in Florianópolis now, it’s become a real tech hub. There are some great tax incentives here.”

Accel’s Kevin Efrusy spotted Neoway back in 2014 and sees a lot of potential in Brazil and its neighboring countries. “In Latin America, there are seven to 10 companies that are very ripe for substantial M&As or IPOs within the next three years, which is encouraging,” he told VentureBeat in an exclusive interview.

When I asked him whether he was nervous about the fact that Neoway has been around for over a decade and is only now starting to flourish, he referred to another one of Accel’s portfolio companies.  “Atlassian, for example, was around for a number of years before we invested but we were the first outsiders to invest in the company, and the trajectory has continued well,” he said.

In addition to Accel making a follow-on investment, Neoway announced today that Andrew Prozes, the former CEO of LexisNexis, will be joining the company’s board of directors, which should help them adjust their model to the U.S. market. Prozes also invested in this round.

Neoway currently has 300 employees across its offices in Florianópolis, São Paulo and New York City.