Jennifer Fonstad, cofounder of Aspect Ventures and a seasoned venture capitalist, admits she’s more of an introvert than an extrovert. But when it comes to networking with Silicon Valley insiders, she’s a pro. Her advice: Don’t be afraid to ask.

Fonstad offered her advice at the Catalyst Conference in San Francisco this week in a fireside chat with Christina Passariello of the Wall Street Journal. The event was staged by Girls in Tech, a nonprofit group supporting women in tech. It has more than 60,000 members across 60 chapters.

Silicon Valley still has a problem with women. About 26 percent of professional computing positions in the U.S. workforce were held by women in 2016. About 5 percent of tech startups are owned by women, and 17 percent have a female founder. A survey found that 48 percent of women say that a lack of mentors is a barrier for them in the tech industry.

And networking is part of that problem, as the “good old boy network” is a self-perpetuating phenomenon. Fonstad noted that 130 men are promoted to management for every 100 women who are (according to a McKinsey report), and speculated that’s because the men networked better.

Fonstad worked in politics early in her career, and she said she often had to put on a brave face and introduce political candidates at networking events. That was a part of her job, and it forced her to be a better networker than she might have been otherwise. That role took the focus away from Fonstad herself and gave her a larger purpose that motivated her to network better.

Finding mentors is part of creating your own network. But mentoring is not a one-way street, Fonstad said. It works in both directions. When you seek out a network, you can look for people with common interests, but you don’t have to have a specific “ask” for people. The point is to create a network that stands on its own by forming it during a quiet time. Then, when it really matters, you can turn to your network when you really need some help, Fonstad said.

Getting structured help matters too. About 20 years ago, Fonstad was introduced to the venture community through the Kauffman fellowship, which matched her to the VC firm DFJ, which had quarterly events where she could network with peers and others in the industry. 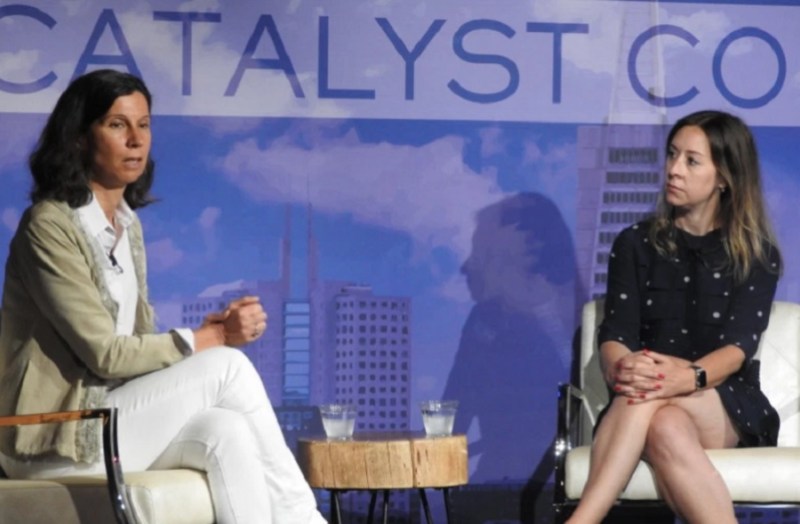 Above: Jennifer Fonstad (left), cofounder of Aspect Ventures, and Christina Passariello of the Wall Street Journal.

“That created a network and peers in the industry for me, which many of my peers didn’t have,” Fonstad said.

She said you can be an effective networker by showing up. But you can become a “super networker” by becoming an organizer, whether it’s a group of lunches on a theme or a running group.

“Just being an organizer enables you to take it up a notch,” she said. “Then people think of you as someone to invite.”

Aspect Ventures invests in all types of startups, but Fonstad pointed out that 40 percent of the companies in her portfolio for her three-year-old firm have female founders, 2.5 times the industry average. (For the most part, Aspect Ventures focuses on series A rounds, usually after a startup has already raised a seed round.)

“We are not trying to be anything more than a new emerging venture firm; we believe that driving diversity in our portfolio leads to better decision-making and better outcomes,” she said. “We think the best way to drive change in our industry is having better returns than the average firm and showing diversity drives better outcomes.”

Aspect Ventures sets up networking events that create connections between portfolio companies, and that helps them get a leg up. Her company also tries to invest alongside other venture companies, and that openness helps expand its network and reach.

Fonstad recommends a new book, Option B, by Sheryl Sandberg, the president of Facebook, who recently lost her husband. The book advises you to focus on small victories that you have every day in order to keep moving forward.