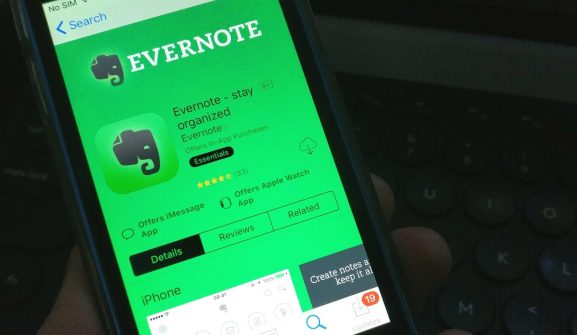 Evernote today announced its apps for BlackBerry and Windows Phone will be discontinued on June 29, 2017. The company today also sent an email notifying its users who use the apps that support is ending.

This news is by no means a surprise — many apps and services over the past few years have chosen to ditch BlackBerry and Windows Phone as neither platform has managed to disturb the Android-iOS duopoly. What is surprising, however, is how little notice Evernote has given its users: just three days.

On June 29, Evernote for BlackBerry and Windows Phone will be removed from their respective app stores (BlackBerry App World and Windows Store). If you have either of the apps, they will continue to function, but you will no longer receive updates. You will also not be able to download them after Thursday, and the apps could stop functioning without notice at any point in the future.

Evernote’s explanation for the move is exactly as you might expect:

As a company, we’re also trying to get better at staying focused. This means spending more of our time and resources on developing our core note-taking products, Evernote Web, Evernote for Android; Windows; Mac; and iPhone, iPad, and iPod touch.

The only good news here is that BlackBerry and Windows Phone users will not lose their notes and notebooks. Any notes you have saved and synced to Evernote will continue to be available across Windows, Mac, Android, iOS, and the web.

If you’re a BlackBerry fan, chances are you’re moving to Android anyway. As long as you have any of the last four BlackBerry phones, you can keep using Evernote without a hitch.

Windows Phone users, however, are running out of options. Indeed, Microsoft is more interested in getting Evernote users to switch to OneNote than it is in releasing new Windows phones.