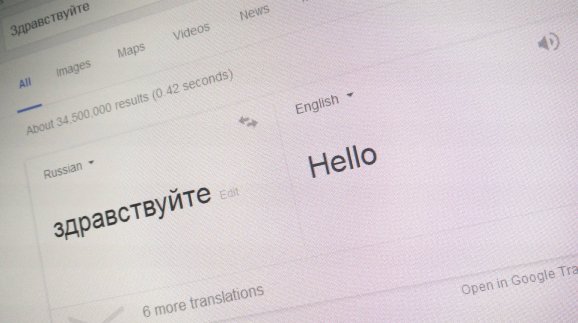 The latest scare story around the rise of robots is that within 120 years all human jobs will be automated. If that study from Oxford University is to be believed, we’re just 3 to 4 generations away from perpetual holiday. The report goes on to predict when AI will outperform humans and — more interestingly — how. Some aspects will be of genuine concern to certain industries: AI will be a better driver than human heavy goods vehicles drivers by 2027, AI will write better novels than we can by 2049, and, closest to today, AI will be better at translation by 2024.

AI has the potential to significantly reshape the translation sector, as it’s doing to many other industries already. However, given that the last time human translators were pitted against machine translation (in February) that 90 percent of the automated translation was judged “grammatically awkward,” that is a bold prediction. Korean is notorious for being a challenge for machine translation, of course, and the margin of victory would likely have been much smaller for more closely connected languages, such as English and Spanish.

A child learning Spanish, for example, may struggle for weeks to learn the word for “spoon” before it sticks. Not so with AI. Neural network machines can even extract patterns and detect and predict trends within use of language. If 2024 is the year robots become better linguists, who knows when they’ll be able to predict what we want to say before we know ourselves, based on everything we’ve ever said before?

The companies involved are some of the giants of the tech world, with Baidu, IBM, Google, and Microsoft all keen to make the breakthrough that puts automated translation above its human equivalents. As a sector, natural language processing (NLP) — the overarching umbrella term for the interaction between computers and human languages — is expected to grow from $7.63 billion last year to over $16 billion by 2021. And the pace of change is fierce. For instance, we’ve just seen the launch of an earpiece that can translate languages in more-or-less real time. Facebook has joined in too, by expanding AI-assisted recommendations into more languages. Within a few days of these announcements, Microsoft announced it’s launching a dictation app in 20 languages that could let you “ditch the keyboard” and provide real-time translation in 60 languages.

So where does this leave the translation industry? From the wide array of AI solutions we’ve tested to date, machine translation still yields unacceptably poor quality content, especially for established brands that (rightly) set a very high bar for their content and brand tone of voice. But given the huge effort underway to vastly improve machine translation, it’ll likely redefine the role of humans in the translation process.

Instead of human translators, we’ll see humans in the loop. Machine translation will do the heavy lifting and people will edit the content. This form of augmented intelligence is likely to be prevalent long before we see standalone artificial intelligence.

It’s hard to imagine robots completely replacing human translators, though. The most common questions we receive from our translators are related to cultural references, and it’s clear that an understanding of the source culture is as important as the source text. I’d question how soon AI can be taught to understand political, historical and cultural contexts in a way that would safeguard against awkward errors. Equally, it will be interesting to see how a machine contextualizes words that can’t be defined simply. For example, there’s a Czech word prozvonit, which means “to call a phone and let it ring once, to get the recipient to call you back.” Or the Indonesian word jayus, meaning “a joke told so badly it’s funny.”

Away from all the bold predictions, where I do see AI making a measurable impact on the translation sector today is with things like workflow and automation. In health care, some are already using AI to spot gaps in doctors’ clinical notes regarding things like medicines or allergies. Salesforce just announced a new AI-powered analytics platform that automatically sources insights that it claims could accelerate sales and optimize campaigns.

However, it’s not yet capable of the creativity, understanding, and personality that make for truly effective translation, localization, or transcreation. And there will always be difficulties with context, or when a word evolves in meaning (think of the word literally, for example). AI’s flaw in a field as emotive and personal as language is simply that it isn’t human. So, while we’ll see machine translation taking on the more basic parts of translation work, it’ll be many years yet before it fully replaces skilled humans.

Ed Bussey is the CEO and founder of Quill, a content production service.