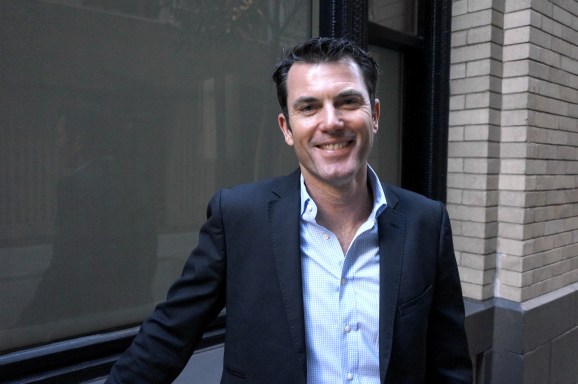 Patrick McKenna has a three point plan to bridge the tech and economic divide between Silicon Valley and the heartland. He was photographed at VentureBeat's Heartland Tech event in San Francisco on June 14, 2017.

And McKenna is hellbent on doing something about it, something that may help address America’s vexing income inequality — if not in the general sense, then in the particular instance of bridging the technological and economic divide between Silicon Valley and the heartland of America. To close this gap, McKenna has developed a three-point plan:

Above: More than a dozen venture capitalists and tech entrepreneurs from Silicon Valley visited the Youngstown Business Incubator in February 2017.

In the months following the election, McKenna began reaching out to tech and business leaders in Silicon Valley and across America. In February, with the help of U.S. Representative Tim Ryan (D-13 Ohio) he arranged for 13 interested people to visit the Youngstown Business Incubator (YBI), tour the region, and meet with entrepreneurs. “They came on their own dime, in the winter, flying into Cleveland or Pittsburgh and driving from there,” McKenna recalled.

Youngstown, Ohio, for better or worse, is a model rustbelt city. As the U.S. steel industry shrank in the 1970s and 1980s, more than 50,000 jobs were lost. Yet it is a city of makers, famous for its factories and assembly plants, and is eager to reclaim its heritage through entrepreneurship and additive manufacturing.

“Youngstown is really interesting in that it faced decades of near-crisis,” said Sara Fenske Bahat, founder of Good Money and now an MBA lecturer in San Francisco, who joined the trip. “I find it fascinating that they still manage hope and wonder if there are lessons for the entire country in the dialogues we’re all having there.”

Bahat spends time studying the factors that help a place thrive and recalled that Youngstown “exceeded my expectations in that we found an immensely cohesive and open-minded business and civic community. They very openly shared their challenges with us and let us in in a way that was surprising and unusual.”

Barb Ewing, CEO of YBI, admitted, “You never know if people are going to dismiss you because you’re from Youngstown, Ohio.” But she described the two-day visit as “very affirming.” She explained, “It’s quite clear that we’re developing products that people see value in and are willing to consider for investment.”

Without disclosing details, Ewing said that at least two of the YBI companies are being vetted by investors as a result of the February visit.  Even with these positive results, Ewing is frank about the challenges local entrepreneurs face. “There’s always risk with startups, especially in the Midwest where investment dollars are comparatively rare, that entrepreneurs don’t have access to all they need to be successful.”

Eric Daimler, a former White House Presidential Innovation Fellow and now a partner at SpinGlass Ventures in Pittsburgh, also joined McKenna’s group. “Youngstown has a lot going for it. Competing against Silicon Valley and NY is not one of them,” he said. He urged a different path forward: “I am continually disappointed by these places in the U.S. telling me the advantages they offer over Northern California when what they really should be doing is telling me their advantages relative to the other 500 places in the country with which they actually compare.”

McKenna doesn’t think it’s likely Youngstown or Kansas City or, say, Lexington Kentucky will dethrone Silicon Valley or Boston or New York anytime soon. And that’s not his aim. Instead, he envisions mutual benefits reaped by large tech companies and regions eager for economic growth, and he’s identified three steps he believes are essential to making this a reality:

He sees the offices as serving several purposes. First, there’s courting tech companies and pitching them on less expensive labor, cheaper real estate, and a higher quality of life. Then there are less obvious, but equally valuable benefits. McKenna says that people working in these development offices could provide “demand signals” about what new technologies are needed and what skills are being sought. Further, simply having a physical presence in Silicon Valley would raise the overall visibility of heartland cities.

“We can do this tomorrow,” McKenna said excitedly, describing the need to match companies looking to expand with regions looking to host them. Connections would be based on specific criteria like job skills, proximity to airports, cost of living, nearby universities, and so on — call it Match.com for the economic development set.

McKenna points to the vast troves of public and private data that could be pulled into a Google- or LinkedIn-type program in order to build such a network. The information is out there, he says, and he envisions an online counterpart to his Youngstown expedition. “Building this would change the way [tech companies] think about expansion. We need to put the Midwest on the menu.”

Silicon Valley’s expansion to the heartland has occurred in fits and starts over the decades. A data center here. A distribution center there. Maybe some manufacturing in between. McKenna believes that building a leadership group from companies that have recently made this leap would help power the expansion effort.

“It doesn’t take 100 companies to get the ball rolling,” he said. “It takes 10 companies to raise the visibility of what’s possible and to lead by example.”

Senior executives from companies like Salesforce, Glassdoor, and Zendesk, which have expanded to the Midwest, might serve on such a leadership council. “We can show that creating tech jobs is scalable and repeatable,” McKenna explained.

McKenna says that one way of understanding the current inequality between tech centers and Middle America is to consider their respective economic roles historically. During the 19th century, the heartland provided food for people in large cities to eat. Then, starting with the Industrial Revolution and continuing though the post-World War II golden years of consumers buying cars and dish washers and air conditioners, the heartland expanded that role. That all changed with cheap imports from overseas, with offshoring, and with automation. America’s heartland was stripped of its role as the nation’s supplier.

Or, as McKenna says a former GM worker told him, “Patrick, we’re not getting these old fucking jobs back.”

McKenna admits his theory is perhaps a simplified way of addressing the larger question: “How did all this happen?” And by “this” he means the technological and economic chasm dividing America. “I looked at Youngstown and asked ‘Why isn’t this place hopping?’ This place is completely isolated. They can find local money, but they can’t access ‘the network’ to tap into the right people and the right ideas to find the right demand signals.”

But this will not be the case for long if McKenna has his way — and he’s just getting started. Bahat, for her part, told us she is planning a second visit in September. And YBI’s Ewing said, “Our hope is that this was the start of an ongoing relationship. We want to open more doors for ourselves.”

In May, McKenna hosted Representative Ryan at a tech community gathering in San Francisco to continue the dialogue. As we went to press, McKenna told VentureBeat that he’d returned from a second visit to Youngstown just a few weeks ago.

He is already planning another trip. This summer, he’ll take his plan to Wisconsin and Michigan. “They could have an office in Silicon Valley in less than six months,” he said. “Companies could begin moving there in another year, and there would be real results in two years.”

For more on the Youngstown Business Incubator: