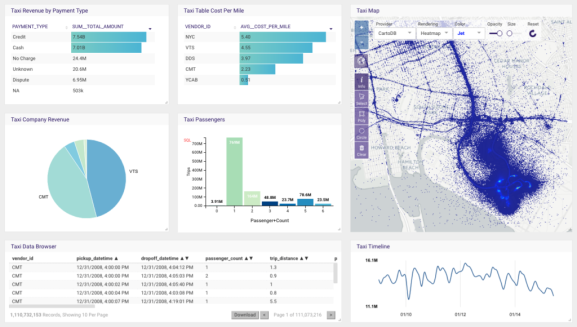 The software, which is powered by a graphics processing unit, allows businesses to analyze large feeds of data faster, using machine learning, BI analytics, and visualization. It can be installed on premises or run in the cloud with Google Cloud, Amazon Web Services, and Microsoft Azure.

Kinetica charges a yearly subscription based on usage. The San Francisco, California-based startup claims to have several licensed customers in production, including the U.S. Army, the National Security Agency (NSA), PG&E, GlaxoSmithKline, and IronNet Cybersecurity. Use cases range from genomics research to real-time drilling analytics and counterterrorism.

The startup initially developed the product for governmental organizations. In 2009, cofounders Amit Vij and Nima Negahban were hired by the United States Army Intelligence and Security Command and the NSA to create a system to track and capture terrorists in real time.

Other players in the GPU database sphere include SQream, BlazingDB, and MapD Technologies, the last of which recently closed a funding round.

Kinetica will use the fresh capital to hire more people and open new offices — the startup told VentureBeat that it has just opened a new office in Singapore. Founded in 2009, Kinetica has raised a total of $63 million and currently has 75 employees.