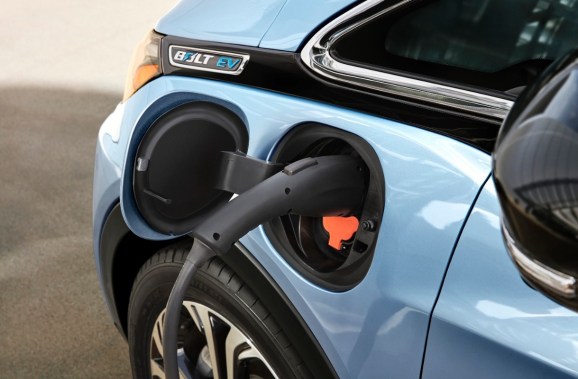 The Chevrolet Bolt EV, outfitted with General Motors’ self-driving electric car technology, has finally hit the streets. GM is about to become one of the first automakers to build and mass produce a self-driving electric car that you will actually be able to purchase and drive in the near future. Since January, the American multinational automaker has created 180 cars for testing purposes in places like San Francisco and Detroit.

With the help of Cruise Automation, GM has become the first automaker to install and program its self-driving software under its own roof. Last year, Fiat Chrysler assembled 100 hybrid Chrysler Pacifica minivans. Then the cars were sent to Waymo — now a sister company to Google but initially developed by the search giant — for hardware and software installation. Assembled at GM’s Orion Assembly Plant in Orion Township, Michigan, the Bolt EV is built, wired, and installed with computers and sensors here in the U.S.

Named Motor Trend’s 2017 Car of the Year, the Bolt EV is not your average self-driving electric car.

The car has multiple cameras, and 40 sensors are installed across the vehicle. A radar system detects oncoming traffic. LIDAR (Light Detection and Ranging) sensors on top of the car use lasers to make a three-dimensional map of the area when driving. With the 10.2-inch screen, you have the ability to watch your car drive from a bird’s eye view — seeing your car plus the area behind and around you — but only if you’re travelling at low speeds. The majority of Americans’ commute is 40 miles round trip, so you won’t have to worry about “plugging-in” for days. The Bolt EV can last for 238 miles on a single charge.

For the self-driving features, the cars use software from Cruise Automation, a self-driving startup GM bought in 2016. Previous cars using Cruise Automation technology required a click of a button and a dial to adjust the speed and get the car moving. Do you need to keep your hands on the wheel and your foot on the gas pedal? That’s optional. It isn’t clear yet if the new self-driving Bolt EV will require the same level of attention (or lack thereof), but we will find out soon, following additional testing.

In all, 130 new self-driving vehicles will be joining 50 older versions of the Bolt to cruise the streets of San Francisco; Scottsdale, Arizona; and Detroit for daily tests. Most of the testing is aimed at perfecting the car’s navigation in city and suburban environments.

Last February, GM published a video of the Bolt navigating through the streets and neighborhoods of San Francisco. Kyle Vogt, CEO of Cruise Automation, explained more in a statement about the recent test drive. He talked about how the operator of the car can use the Cruise mobile app to select a destination, after which the car will take over. In the video, we see the self-driving car detecting and stopping at stop signs, slowing down for pedestrians, and waiting for stoplights.

GM continues to test the Bolt EV vehicles before they are released, making safety a priority. The automaker has yet to set a release date, but its internal goal is to see the cars roaming city streets in the U.S. in the near future. It won’t be long before you pull up next to an electric car that knows more about the roads than you do.