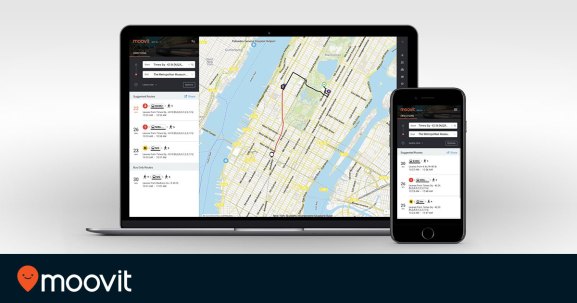 Since launching five years ago, Moovit has quietly developed a powerful mapping tool for public transportation that is used by millions globally.

Now the company is preparing to take its next big step by leveraging the community of mappers who helped build its service. To do that, Moovit has opened its treasure trove of data to cities around the world in the hope that it will transform urban mobility.

Dubbed Smart Transit Suite, the new set of tools for cities also represents a step toward building a more robust business model to sustain a company that has raised more than $81.5 million in venture capital over four rounds. After five years of development, the company is feeling confident.

“Our data is very accurate,” said Yovav Meydad, Moovit’s vice president of products and marketing. When it comes to the insight, the company thinks it can deliver. He even claimed: “We don’t have any competition.”

Just by the numbers, he has a pretty strong case. The Tel Aviv-based company was founded in February 2012 by Nir Erez, Roy Bick, and Yaron Evron. The first version of the basic transportation app was released in January 2013.

Since then, it has amassed more than 60 million users, and it now offers public transportation information in 1,400 cities and 77 countries worldwide. It has also boasted notable partnerships, such as one with the Rio Olympics to provide mapping and mobile data to help keep attendees and athletes moving even in overcrowded conditions.

The backbone of the service is the 175,000 people, called “Mooviters,” who voluntarily contribute information about local public transportation services. For that reason, Moovit likes to call itself the “Wikipedia of public transport.”

While some cities now make information about their public transportation systems available via open data platforms, many more do not. To overcome that hurdle, Mooviters help plot things like bus and metro stop locations and routes.

If that sounds improbable, consider that this has spawned clubs and partnerships around the world, with people at universities or groups of locals coming together to map their public transport systems, Meydad said.

For users of the app, this creates a rich, real-time set of data that helps them plan the best route, which may include several modes of transportation. In turn, those users supplement the crowdsourced data and any publicly available data through their searches for the best routes. Moovit analyzes those queries to better understand how individuals and cars are moving around an urban area.

All these sources have allowed Moovit to build a powerful repository of data on mass transit systems. And that has become the heart of its new Smart Transit Suite.

Local governments can license the data back from Moovit, and the system includes tools that help policymakers better understand how to manage their transit systems, plan construction projects, and analyze more precisely how people and vehicles are flowing around their city. In turn, cities can make this data available to their citizens and local companies in various forms.

Moovit is betting that transportation in general is on the cusp of a massive revolution, pushed by a combination of new modes of transport as well as by things like ridesharing. Cities need to optimize the systems they have in place while also figuring out how to evolve those systems over time to embrace new options.