Big companies are too slow, too disorganized and too stuck under the weight of outdated playbooks and bad habits to benefit from opportunities to innovate.

That’s the picture the latest report by accelerator 500 Startups paints after surveying over 100 corporate executives that oversee innovation, including collaborating or investing in startups.

Rubbing shoulders with startups, collaborating with them in some way, or absorbing them altogether, may sound like a clever way for established companies to innovate. But the strategy doesn’t appear to be working, according to the 500 Startups report.

The report portrays the problem as one that can be solved by educating corporate innovators. But while handholding might improve the results, my hunch is it won’t be enough to produce a substantial turnaround because big companies and startups are incompatible at their core.

Tomasz Tunguz, Venture Capitalist at Redpoint, published a blog post last May about Conway’s law, which states that a company’s product or service will, more often than not, reflect its organizational structure. In other words, the nature of the tree determines the nature of its fruit, as Googler Manu Cornet illustrated in his now-famous doodles from 2011: 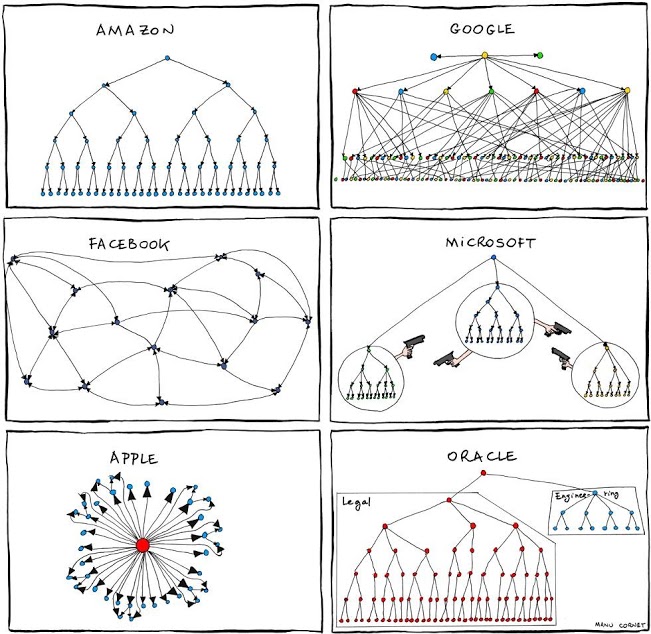 While Conway’s law was originally applied to describe the phenomenon specifically at software product companies, I think it might hold true for the influence a corporate structure has on the capacities of a company — particularly in relation to how it impacts a company’s relationship towards innovation.

That is, can you create a culture of open innovation without first tweaking, reorganizing, or adapting the corporate structure to be compatible for it? Going by the 500 Startups’ report, you can as long as you’re okay with mediocre results and lots of opportunity cost down the drain.

On the flipside, if a company is willing and able to reorganize, decentralization could be a solution.

Complete decentralization — for instance, the DAO model (decentralized autonomous organization), obviates the need for bosses and traditional bureaucratic processes by letting blockchain technology run the show. Imagine all of the heavy baggage you get to instantly throw out the window when you are able to operate under this model.

A less high-tech, more human-powered and mainstream example of a decentralized structure is Supercell, the massively successful Finnish game studio, and its cellular-style model that in effect houses a multitude of startups under one roof. The studio has been defying gravity by churning out billion-dollar titles one after another, and doing so in notably one of the most disruptive and challenging industries there is: mobile games.

“Supercell’s homegrown cell-based approach is not predicated on the company knowing what type of game will be the next blockbuster but rather on unleashing the creative power of multiple independent cells tasked with building their own games quickly and efficiently and letting the audience decide which ones will be hits,” Neil Rimer, Partner at Index Ventures, wrote back when Softbank invested a huge stake in the game studio.

For large companies, this extent of restructuring is probably impossible, but perhaps there is a middle road where both a centralized and decentralized model can co-exist; a hybrid structure.

Last week Google unveiled a dedicated website for its Area 120 program, an in-house incubator of sorts that evolved out of its company policy to encourage employees to free up 20 percent of their time in order to work on new ideas. It’s a decentralized structure that is available to every employee, which shouldn’t be misunderstood as an innovation or R&D division. It’s a second corporate structure running in parallel.

That’s the kind of half-way paradigm shift that big companies would do well to consider, more or less dividing into two cells and letting them co-exist. The hybrid model might help companies reap value from both worlds and, at the very least, foster a culture that is better equipped to work with startups and the new ideas that come their way.