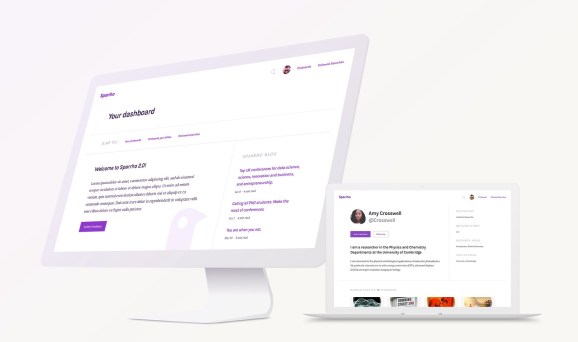 While the internet provides open access to a vast range of information, scientific research remains largely siloed and inaccessible. Sparrho is trying to solve this by offering a free platform to find and share research publications and patents. The London-based startup today announced funding of $3 million to further develop its product.

From remote sensing in geology to the effect of nutrition on cystic fibrosis, Sparrho claims to list and reference 60 million papers from over 45,000 publications. “We bench above our competitors in terms of the volume of indexed content as well as frequency of updates,” said Sparrho cofounder and CEO Dr. Vivian Chan, in an exclusive interview with VentureBeat. Chan founded the startup in 2013, after completing her PhD in Biochemistry.

The community of one million users across 150 countries includes a network of PhD researchers, academics, students, and curious minds, adds Chan. “To date, users have pinned and shared over 700,000 pieces of scientific content using the platform,” she said, making it a sort of a Pinterest for the science community.

To provide quality content, Sparrho vets the sources — whether peer-reviewed journals, established pre-print servers, or official patent repositories. The team then uses both artificial intelligence (AI) and human expertise to curate the content.

The startup monetizes by selling two types of enterprise subscriptions — one for research and development (R&D) teams to further their research and one for marketing teams to boost their brands.

Initiatives like these will hopefully help open up the science community around the world. Elite journals like Cell, Nature, and Science pride themselves on setting extremely high standards of publication, accepting only five to ten percent of submissions. What’s more, these publications charge tens of thousands of dollars a year for access to their research papers, says Chan. But she is optimistic.

“We are seeing signs of publishers making some initial moves to improve access to their corpus due to increasing pressure from funding bodies,” she said. “It’s important to remember that we’re talking about research that is by and large funded by tax payers or philanthropic organizations like the Bill & Melinda Gates Foundation, Wellcome Trust, and the Max Planck Institute, and yet it sits behind commercial paywalls.”

As of January 2017, all research publications that originate from projects funded by the Bill & Melinda Gates Foundation must be made immediately accessible to anyone.

There are other open access online platforms, like eLife and Frontiers, that have been operational for the past few years. The former was founded by Nobel Laureate Randy Schekman, who famously denounced Cell, Nature, and Science for their selection criteria. The Guardian quoted him as saying: “Just as Wall Street needs to break the hold of bonus culture, so science must break the tyranny of the luxury journals.”

Today’s funding combines a seed round of $1.2 million and a pre-Series A round of $1.8 million. Investors include White Cloud Capital, AllBright, and Beast Ventures.