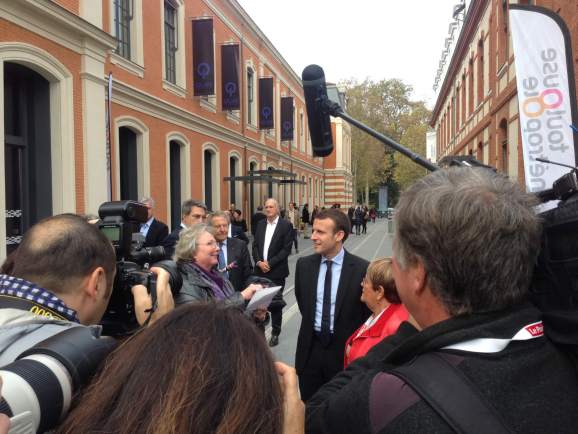 There’s a good chance that you’ve never heard of NationBuilder even though it might be one of the most influential services on the internet.

The political software and platform is used by politicians of all stripes to build their websites, manage email campaigns, and raise money. One of its more notable clients is President Donald Trump. Indeed, the company is making a massive impact on U.S. politics.

But over the past year, it’s also been playing a growing role in European politics, having been notably used in the Brexit campaigns. And, capping a remarkable run on this side of the Atlantic, NationBuilder recently played a central role in helping Emmanuel Macron’s insurgent political party “La République En Marche!” secure a legislative majority that was as improbable as it was massive.

“France took us a little bit by surprise,” said Toni Cowan-Brown, vice president of European Business Development at NationBuilder. “Even just a month before the legislative elections, En Marche! didn’t have the names of all their candidates.”

Certainly NationBuilder can’t take all the credit for that win. But its work with En Marche! offers a good peek into how political campaigns are continuing to evolve in the internet age.

If you recall, President Obama won huge kudos for the digital savvy of his 2008 campaign. Los Angeles-based NationBuilder was founded in October 2009 by CEO Jim Gilliam with the notion of making many of those same tools more widely available.

The platform launched in April 2011, and by last year it seemed to be everywhere, as the internet, email, and texting have become de facto tools.

For many candidates, particularly those who lack staff or technical skills, managing a digital presence can still be a big chore. So NationBuilder offers what is essentially a turnkey solution. The company’s tools help campaigns put up a website quickly, build a database through registrations, send targeted newsletters and email blasts, and leverage micro-donations.

In 2016, NationBuilder says it was used by about 40 percent of all contested elections at the state and national level in the U.S. That included 3,000 political campaigns.

Since its founding, the company has helped campaigns raise $1.2 billion. By late 2016, NationBuilder had helped its clients raise $350 million through the third quarter of that year. It enabled these campaigns to scoop up huge sums through small donations, which averaged around $77 during one month.

“If you give the right tools and the right opportunity to the key people on the ground, the reach is much wider,” said Cowan-Brown.

Meanwhile, NationBuilder had begun building a nascent operation in Europe, where rules around campaign finance and data privacy had made the use of digital tools more limited and cumbersome.

Still, the company made a big impact with the Brexit campaigns, and with the previous U.K. elections. It then began wading into the French presidential contest that gathered steam in late 2016.

Despite Macron’s big win in the second round of presidential voting, political pundits in France were dubious that his new party could attract enough candidates for the legislative elections to secure a majority. The assumption was that France would have a split government and likely be facing a political stalemate for years.

Macron made his own task even more difficult. He insisted that half of En Marche!’s legislative candidates be women and that half be political novices who had never held office.

NationBuilder helped En Marche! launch a network of more than 400 websites in just a few days, one tailored for each candidate. The company has called the size and speed of the rollout “almost unprecedented.”  The websites were at once personalized with information on each candidate and yet standardized with a common look and En Marche! information to communicate the party’s larger branding.

Now that the election’s been won, Cowan-Brown said she will be watching to see what En Marche! does next with this political infrastructure.

After Obama’s 2008 victory, many pundits thought he would use digital tools to transform the process of governing, he had changed the nature of campaigns. Nope. Likewise, President Trump using digital tools to win without the traditional infrastructure of a campaign. But those tools are proving to be less effective at helping him govern.

“I’m hoping with all that will all that infrastructure in place, En Marche! will keep it going,” said Cowan-Brown. “We built this huge thing with them in a short period of time. So we hope they will build on that. It’s just a foundation, but it’s a pretty solid foundation.”