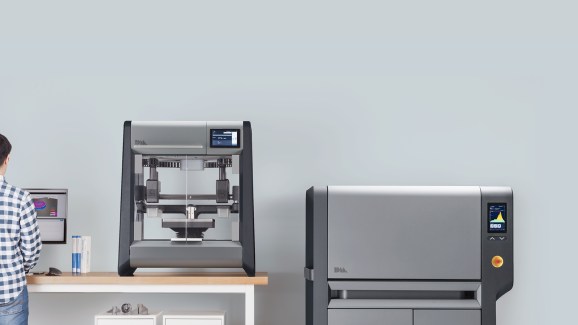 The latest tranche of funding comes just five months after the Burlington, Mass.-based startup nabbed another $45 million in funding, with GV as the lead investor. Its total equity investments to date have now surpassed $210 million.

Founded in 2015, Desktop Metal is setting out to accelerate the transformation of manufacturing with “end-to-end metal 3D printing solutions,” the company said in a statement. While metal 3D printing has existed for a while across industries such as aerospace and automotive, Desktop Metal has been focusing on making the technology accessible through attending to cost, speed, and quality.

Back in April, the company debuted its first two systems. The Desktop Metal Studio System, aimed at helping engineers build prototypes, starts at $49,900, though the complete system, including printer, debinder, and furnace, costs a somewhat more princely $120,000. However, Desktop Metal is quick to point out that it is around 10 times less expensive than existing technology. Next year, the company will also be releasing its mass-production metal 3D printing system, which is expected to cost north of $400,000.

The company said having another $115 million in the bank will help it expedite entry to market, expand its sales programs, and turbocharge its R&D. It is also exploring international expansion.

“We are on the brink of an exciting transformation in how metal parts will be designed, prototyped, and ultimately mass-produced,” said Desktop Metal cofounder and CEO Ric Fulop. “This latest funding puts us in an ideal position to ship our Studio System in the coming months and our Production System in 2018, while also enabling us to grow our company globally. The continued support of our investors underscores the power of our metal 3D printing solutions to help engineers and manufacturers, for the first time, apply metal 3D printing for the entire product development lifecycle — from prototyping to cost-effectively mass producing complex metal parts.”

The broader 3D printing market is expected to be a $32 billion industry by 2023, according to a recent Markets and Markets report, which represents a compound annual growth rate (CAGR) of almost 26 percent over the next six years.

Though companies such as MakerBot and Autodesk have helped make 3D printing more accessible to creatives working with plastics, for example, metals have a much higher melting point and are much more complex to work with — and it is this problem Desktop Metal is looking to solve.

Earlier this year, Boeing announced plans to save up to $3 million per plane by 3D-printing parts for its new 787 Dreamliner, and if Desktop Metal can enable similar efficiencies for more engineers working on smaller-scale projects, it could go some way toward democratizing the manufacturing industry.

“Our mission at GE Ventures is to invest in startups with cutting-edge technologies,” added Steve Taub, senior director of advanced manufacturing at GE Ventures. “Desktop Metal’s team and technology have delivered on exactly what they’ve promised: a vision to change the way parts are manufactured, with the innovative metal 3D printing technology to make that a reality. We see a huge potential for engineers to rethink the way parts and products are made, both domestically and abroad.”