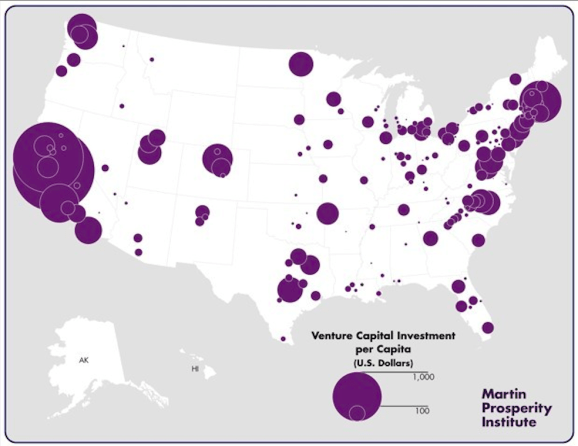 Venture capital investment on a per capita basis in the Silicon Valley area last year was 10 times greater than in the Grand Forks, North Dakota and Minnesota area

From Silicon Alley to Silicon Beach, existing tech hubs and emerging ones long to be seen like the Valley: the self-proclaimed epicenter of all things tech. But why is that? When did living in San Francisco become a necessary prerequisite for being a startup founder or employee?

As a New Yorker, I’m a bit biased to the Big Apple — the hustle and bustle of the city and the intrinsic drive that people have here opposite of our laid-back counterparts in the Bay. There are hundreds of tech companies that make up our local ecosystem, yet we still seem to come second to San Francisco. A big blow to the empire state, but an even bigger blow to cities on the horizon.

Emerging hubs like Miami, Raleigh/Durham, Dallas, Nashville, Cincinnati, Detroit and others deserve the same effort, education, and access that we pour into the Bay. Tomorrow’s next tech leaders and talent depend on it.

It’s imperative to think outside of San Francisco for true diversity, not just physical but intellectual as well. The misconception that you can’t have a scaling, successful tech business outside of the Valley threatens innovation everywhere.

How do emerging hubs keep up?

Entrepreneurs like Felecia Hatcher, co-founder of Black Tech Week, have been able to capitalize on working with their local economy to scale change and increase the interest of tech culture. I met her last year during Black Tech Week, a summit where black technologists, VCs, and more come together to discuss economic development and innovation.

The Knight Foundation recognized the importance of the summit and understood Felecia’s vision, which led them to recently award her with $1.2 million to scale. Organizations like the Knight Foundation and the Case Foundation historically look to invest in areas outside of San Francisco in hopes of diversifying their portfolio and making an impact on underrepresented communities.

Felecia is confident that by focusing on drawing resources, training, networks and funding, the black community in Miami and beyond will be able to thrive. “There is a shift happening, where groups that have been shut out are growing tired of knocking on locked doors,” she says. “They’re starting to stay in their communities and build their own pipelines and ecosystems.”

While founders like Felecia are doing the groundwork to make a change, investors must see the value and step up to make a difference as well. The question is do they see it?

What can investors do to expand their involvement?

Traditionally pattern matchers, investors look to fund companies that have the same characteristics of successful ones prior. While this method can be useful in building a successful portfolio, founders of startups that don’t fit into the pattern may be overlooked. The result? An industry full of white males who have graduated or attended Ivy League schools. In return, they create companies that employ people who look just like them. That’s what leads to tech’s diversity problem.

In order to break the cycle, investors must be able to think outside the box and go against the grain of what tomorrow’s unicorn may look like. Actively visiting areas outside of the Valley, having conversations with founders in urban and emerging areas, and laying the groundwork to create new hubs across the country will allow true innovation to occur.

The way VCs invest in up-and-coming startups can use a bit of fixing. There are only a handful of firms investing billions of dollars annually. According to CityLab, “The top 10 metros alone account for more than three-quarters (77.6 percent) of all venture capital investment across the United States, while the top 20 account for more than 88 percent.”

Representatives of these firms are more likely to pattern match, trying to find people from familiar areas, educational backgrounds and networks. This results in people solving problems that don’t necessarily work for larger populations.

The tech industry owes itself to remove as many barriers as possible so that anyone has the chance to make their dreams a reality, regardless of their age, gender, income, or zip code.

Nasir Qadree is one of the very few black VCs who are actively trying to find new ways to bring underrepresented voices to the table. We met at a pitch competition over a year ago, and he shared his thoughts on the troubling outlook for founders who don’t fit the “pattern” many VCs look for when making an investment.

Now the Associate Director of Social Investments at AT&T, Nasir is eager to make a difference in how VCs attract, invest, and develop the companies of tomorrow. “By investing in new tools and solutions that leverage our unique technologies and capabilities, we enable personalized and mobilized learning for students and workers of all ages and backgrounds,” he says. “Our goal is to provide and support opportunities to foster skills that will meet the needs of the 21st-century workforce. Opportunity for new ideas to grow is highly concentrated, and new ideas rarely have a level playing field.”

The solutions of tomorrow depend on where they’re created and by whom they are created. Looking outside of San Francisco ensures that the next generation of tech companies are a true representation of the world that we live in. The ideas that sustain the current tech economy are not constrained to one type of sector, so the people who produce them should not be constrained to a 405 area code.