Most augmented reality glasses aren’t practical. So Mira designed AR mobile glasses that were created from the outset to be lightweight, minimalist, and low-cost. Today, the company is unveiling its Prism glasses, which you can preorder for $100.

Prism glasses are inexpensive in part because they’re mostly plastic and weigh well under a pound. You put an iPhone into a slot and the glasses project the stereoscopic images on the screen of the iPhone onto the glasses, giving the wearer a digital overlay on top of the real world.

“We are increasingly fascinated with digital reality and AR, and blending both the real and virtual worlds,” said Ben Taft, cofounder and CEO of Mira, in an interview with GamesBeat. “We wanted to experiment, but the only way to do that was with kits that cost thousands of dollars. We couldn’t do that, and so Mira was born out of necessity.”

The team of four founders has been working together for about four years. They met during the inaugural class of the University of Southern California’s Jimmy Iovine and Andre “Dr. Dre” Young Academy for Arts, Technology, and the Business of Innovation. They went on to jobs at Sony Pictures, Daqri, and other places, and got back together to found Mira in 2016. 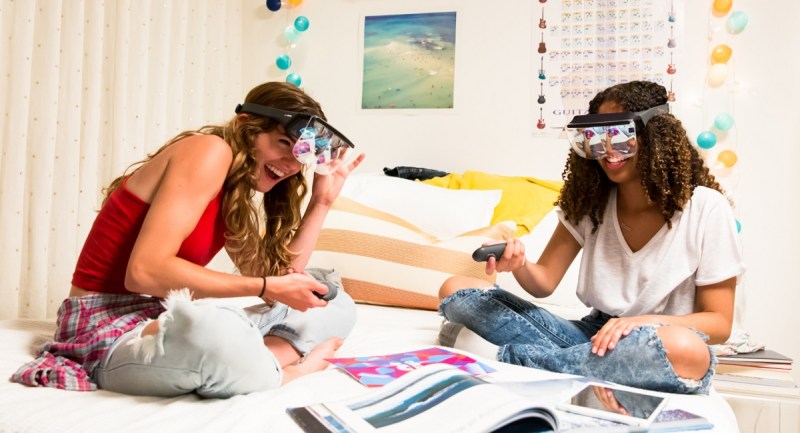 Mira plans on shipping the glasses for consumers in the fall. The whole idea is to deliver smart glasses at a fraction of the price of rival hardware. Microsoft, for instance, is selling its HoloLens prototypes for about $3,000. Mira is delivering some of the same functions, though not at the same level of quality, of course. Consumers will decide whether Mira has hit the right balance.

“Augmented reality is fragmented between the high end and the low end, but there is no real middle solution,” said Matt Stern, cofounder and chief operating officer of Mira, in an interview. “We started by building a lot of makeshift units. It took a thousand prototypes and 3D prints.”

The funding will be used to manufacture the Prism headset, develop a software toolkit, and create consumer content.

It’s pretty easy to use. Users simply open an app on an iPhone, slide the phone into the Prism headset, and then begin using the interactive holographic content. The lenses are clear, enabling people to see the eyes of someone they’re talking with while they’re wearing the glasses. By contrast, many other glasses are shaded, resulting in an isolating experience.

“Rather than create a fully isolated experience, we could focus on more enhanced reality,” Taft said. “You can remain present in the real world with AR.” 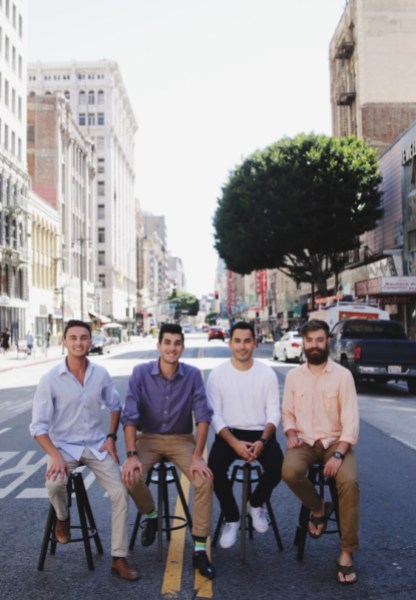 Someone with an iOS device (iPad or iPhone) can use Mira’s Spectator Mode to join into the experience in real time, enabling collaborative exploration in augmented reality.

Through Spectator Mode, users can also record video or capture photos of their friends’ experience and share via social media. The initial suite of AR content ranges from solo challenges to multiplayer games, including mixed-reality puzzles, holographic chess, and digital warship battles.

I tried it out. The headset was remarkably light. The sharpness of the images wasn’t great, but it wasn’t bad either. The image resolution is the same as what you can reproduce on an iPhone screen. The headset has a 60-degree field of view. The glasses fit inside a case that isn’t much bigger than the case for a regular pair of eyeglasses. I played a simple game where I tilted a board and made a marble roll through a maze. And the Mira guys also put down a piece of cardboard with a marker on it, which made an image pop up in front of me in the glasses. While I was using the headset, it drew the attention of some senior citizens in the cafe. They were fascinated by it, and one of them exclaimed, “Oh my god!”

The remote control tracks acceleration and rotation and enhances the AR experiences with a touchpad, trigger, and two buttons, and it can be used as a fishing rod, laser pointer, paintbrush, steering wheel, or magic wand. Mira uses the Unity 3D game engine, and its software development kit (SDK) is in the works. So far, the headset works with iPhone 6, 6s, and 7.

The company has 12 employees. 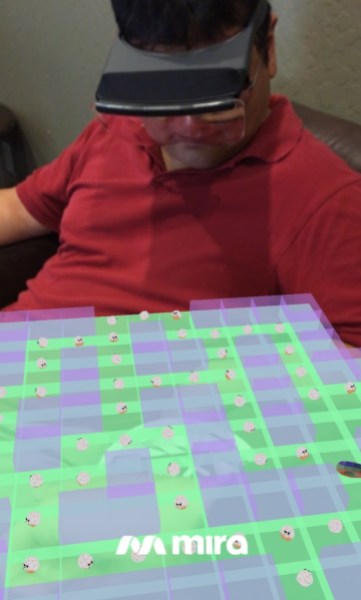 Above: Dean Takahashi tries out the Mira Prism AR glasses.