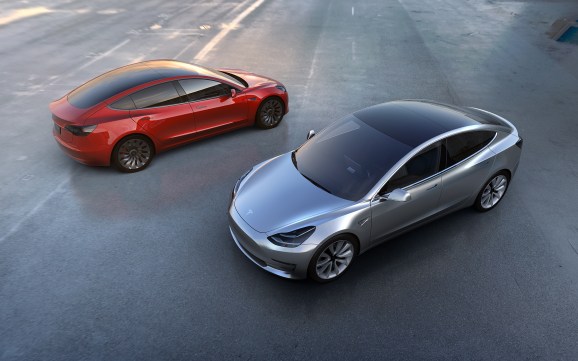 What you thought you knew about electric cars just changed. The $35,000 Tesla Model 3 recently made its first appearance off the production line. The new model will belong to Tesla’s CEO and cofounder, Elon Musk. Inside the steel and aluminum body of the battery-powered car are five features you won’t want to miss.

Last year, Tesla introduced a new hardware collection, dubbed Autopilot, in the current models. This hardware includes eight cameras, a radar unit, a set of all-around-the-car ultrasonic sensors, and an Nvidia Drive PX2 computer. Each Model 3 will come standard with Autopilot hardware. As Tesla continues taking deposits to reserve the electric car, they charge an additional $3,000 for the option notably named Self-Driving Capabilities. The software has not been released to explain the functions available, but we can safely guess it means more automated driving.

Climb inside the simple black-and-white interior of a Model 3 and sink into the driver’s seat. Look beyond the steering wheel and you won’t find any gauges or displays at the windshield — it feels empty. To your right, however, a 15-inch touchscreen displays all controllable features for the car, such as speed, navigation, and other factors. This simplifies the interface, rather than using one display for navigation and one for speed, along with other traditional gauges on the dashboard, as most cars proffer.

All Model 3s will include available features like high-speed charging as standard. The Model 3 electric car will drive at least 215 miles on a single charge. Tesla plans to double its number of charging stations across the U.S. — close to 8,000 by 2018.

Even the base Model 3 is capable of significant speed — 0 to 60 in less than six seconds. As Musk says in the release video, “At Tesla, we don’t make slow cars.” This is just a starting point for the electric car. Expect a faster Model 3 in the future. Tesla vehicles regularly receive over-the-air software updates to add new features or functions. When another update is available, you will be notified on that 15-inch touchscreen. You can connect your vehicle to your home’s Wi-Fi network to quickly download and install the updates.

Tesla describes two design strategies it used to create a compact car that can comfortably fit five people. First, as an electric car, the Model 3 does not hold a large combustion engine in the front of the car. This allowed Tesla to compress the instrument panel and move the front seats slightly forward, creating more space in the back seats. Second, the rear roof area is one continuous piece of glass. This creates more headroom for passengers. In addition to these features, the Model 3 has both a front and a rear trunk. Musk says the Model 3 feels more “open” than any other car of its size. As he said, you won’t find a $35,000 car like the Tesla Model 3 anywhere else on the planet.