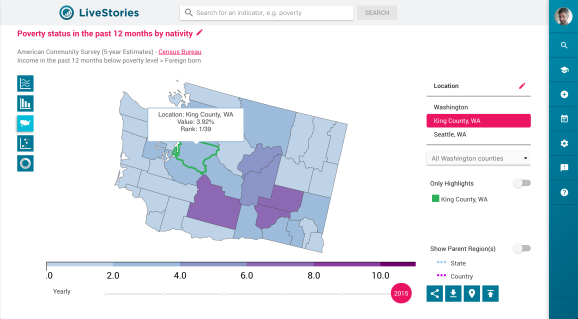 LiveStories, which provides software that simplifies access to civic data on poverty, health, economics, and more, today announced that it has raised $10 million in funding. Ignition Partners led the round, with participation from returning investors True Ventures and Founders Co-Op.

The Seattle-based startup sources data from federal, state, and local governments, including The Bureau of Labor Statistics, the U.S. Census, and the Centers for Disease Prevention and Control.

“The civic data workflow is fragmented across multiple tools and vendors,” wrote LiveStories founder and CEO Adnan Mahmud, in an email to VentureBeat. “For example, you might use Google to find the data, Excel to clean it up, Tableau to explore it, and Word to create a static report.”

According to Mahmud, LiveStories’ software allows customers to find and communicate civic data in a more interactive way — across charts, videos, and images. “Our platform automatically visualizes the data, down to city and county localities,” wrote Mahmud. The data can then be shared on social media networks like Facebook and Twitter.

LiveStories claims to have more than 120 customers, which include LA County, CDPH, San Diego County, UCLA, and the Gates Foundation.

Today’s funding will be used to further develop the product and increase sales and marketing. Founded in 2015, LiveStories has raised a total of $14 million and currently has 20 employees.