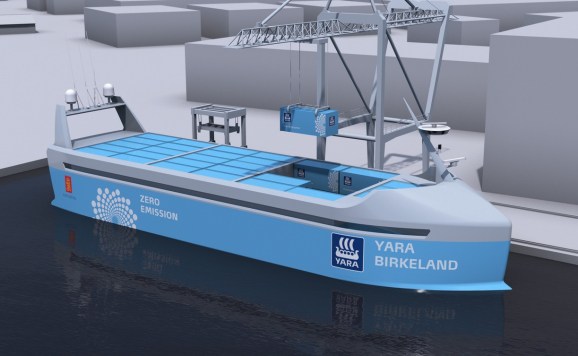 A crewless ship to be christened the Yara Birkeland is expected to start sailing in 2018, initially delivering fertilizer along a 37-mile route in southern Norway.

The electric-powered ship will be miniscule by modern standards, with the capacity for 100 to 150 shipping containers. But its arrival could be a huge turning point for the global shipping industry.

The ship, according to the Wall Street Journal, will cost $25 million, about three times as much as a conventional ship of similar size, but will save up to 90% in annual operating costs by eliminating both fuel and crew.

Though it is projected to launch next year, it will transition to fully autonomous operation only in stages. It will first be operated by an onboard crew, then remotely, before becoming fully self-guided by 2020. That is around the time rules governing autonomous ships are expected to be in place.

The Yara Birkeland is being developed by the agricultural firm Yara International and guidance-system maker Kongsberg.

A Yara executive told the Journal that once regulations catch up, the company plans is to build bigger ships that could work longer routes. If similar cost savings could be achieved, it could be a lifeline for the global shipping industry, which has spent years struggling with overcapacity and falling rates, leading to cratering profits and even bankruptcy for major firms.

The impact of autonomous ships may be milder than that of self-driving freight trucks, though, when it comes to jobs. While driverless trucks could put hundreds of thousands of human drivers out of work in the U.S. alone, the relative crew needs of shipping have already been declining for decades. Many container ships, including those carrying more than 10,000 containers, already use 30 crewmembers or less.