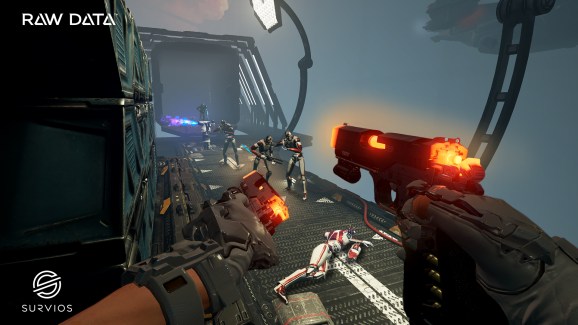 The reality is virtual, but successful VR games still require cold, hard analytics. Catch up on this VB Live event to learn how Survios is using data and analytics to make Raw Data, the first VR-exclusive game to reach #1 on Steam’s Global Top Sellers list, so successful.

“As someone who creates a product — a very, very expensive product to create — you really want to know literally everything your users are doing with it,” says Nicolas Nadeau, president of Exostatic.

In the digital economy, data is the new oil, and now data and analytics stacks for virtual reality make it your game’s most valuable resource too. It’s the age of first-party data — the data unique to your business. And there’s a new kind of first-party data, which is the data generated by the game running on your VR hardware.

“With data, we can optimize quantitive analysis — identify user patterns and understand where we could improve, what we should devote our attention to next, and basically use data as empirical evidence to help us decide where we should go next,” Nadeau explains.

Raw Data, Survios’ first title, was the first VR-exclusive game to reach #1 on Steam’s Global Top Sellers list, and the first VR game to make $1 million in a month.

“Data can lead you to directions of competitive advantage and smart predictions,” Solganik explains. “We’re taking all that information that we get from analytics and driving it toward optimization.”

The first step to take is figuring out how and where you want to use analytics.

“Generally speaking, timelines are short, development is expensive, so you really need to understand what you need to be focusing on,” he adds.

Identifying and prioritizing feature development is critical, he says, as well as identifying the top issues for your audience, and keeping tabs on what your audience really wants. Validating your core audience and understanding who you’re going to be building for is key.

“Understanding where your audience is coming from allows you to understand who you’re developing for and create strategies with actionable insights, including localization, marketing, and player growth,” he says. “You don’t really want to be making assumptions on where your audience is, or the hardware that they’re using.”

They monitor CPU breakdowns, as well as which users are within minimum specs and which are in recommended specs. Something that’s been specifically helpful, he says, is understanding their substrate breakdown, or in other words, where players are launching and playing the game — Steam, Oculus, or any other platform.

“Understanding that breakdown allows us to plan launching on multiple platforms for future titles,” Solganik says.

Onboarding statistics have also been critical for the game’s success, particularly because virtual reality is a whole new experience and a whole new way to play games.

“It’s a firm belief of mine that the best way to increase retention is really to onboard players appropriately,” he explains.

For some of their earlier builds, onboarding was an unexpectedly difficult process, with tutorial completion rates much lower than they had looked for. For instance, players progressing through the game without using the defense turret tutorial were having a more difficult time than expected — while those who went back to the tutorial later in the game became far more effective. It led them to optimize the tutorial zone, and give players easier and faster ways to access the tutorials through the lobby.

Looking at the breakdowns of control schemes also helps them understand how players are interacting with the game and within the VR environment. They specifically look at which control schemes are used on which platforms, which helps illuminate how players are experiencing the virtual world, and how they respond to the new play challenges of virtual reality.

Data is also essential for one of the most important parts of inhabiting a VR world: characters that players get invested in.

“Success would generally mean the hero has a high play rate and a low quit rate,” Solganik says. “I think there’s an internal feel of how the character functions in VR and how you feel a human experience in VR while playing that character.”

Statistics showed that two of their initial hereos at launch had those worryingly low play rates, along with a significantly higher quit rate. A closer look at match statistics like score and victory percentages also showed that they had a lower victory percentage than other characters, were doing quite a big less damage, and had a higher overall number of deaths.

It turned out that the character Boss was a bit cumbersome to use, especially for first-time users. They simplified the character’s animation in battle, added an auto-grip option, and improved weapon handling in general, Solganik says, in order to achieve one of their most important goals — creating player investment in characters by creating a deeply immersive experience.

“We continue to review Boss’s survivability, damage, and victory percentages, but in general we’re much happier with where Boss is today,” Solganik says, “Specifically because we’ve gotten actual data around how we needed to make changes.”

For a deeper dive into the critical KPIs that make all the difference, a closer look at the Raw Data case study, and an overview of the data analytics tools that power success stories, don’t miss this VB Live event!