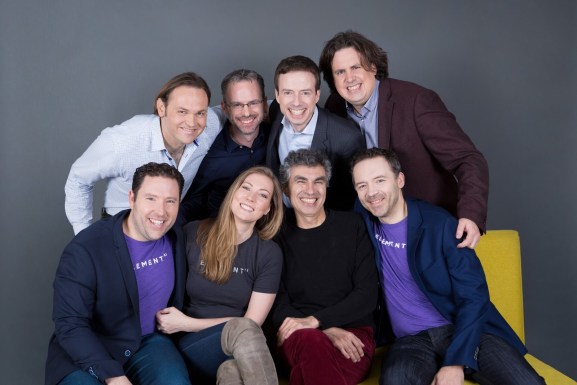 Element AI made a massive splash last month when the company announced it had raised $102 million in a series A funding round — one of the largest of any AI company to date. Since then, the company’s phone has been ringing off the hook, proverbially speaking.

In the month after the funding announcement, Element AI received 150 qualified applications to join its network of partner startups, 200 inquiries from potential customers, and 1,500 resumés. During that time, the company created roughly 50 sales proposals for how it could help those customer applicants.

CEO Jean-François Gagné recently finished a trip to France, where he met with 10 of the country’s 40 biggest companies. All of those meetings led to sales proposals, he said in a recent interview with VentureBeat.

Element AI’s business model is to act as a trusted partner for enterprises that want to start using artificial intelligence but don’t have massive teams of data scientists with deep expertise. The company aims to combine expertise from AI experts on staff, along with a partner network of startups, to help build AI systems for larger businesses.

The funding helped the company get taken seriously and start selling its services to higher-ups inside potential customer companies.

“More importantly, it enabled us to reach another level of executives,” he said. “So we’ve been able to engage in very meaningful conversations with CEOs, because we’re no longer the company that one department or a group is going to try and do a project with. We’re now perceived as an established organization that will be there.”

Another key factor that Gagné pointed out is that several of the company’s backers are also its customers, which can help prove its traction.

Raising a massive war chest was important because Element AI needs its customers to view them as an incumbent in the market, on par with the likes of IBM, according to Gagné. IBM’s consulting operation surrounding its Watson tools is the startup’s largest competitor.

“Given who we’re going against, and more importantly, the AI trusted partner role we play for more traditional businesses, requires us to be perceived as an incumbent at a certain level,” he said.

Trying to build a consulting organization that competes with the likes of IBM as a startup is a difficult proposition. To help with that, Element AI is looking to hire 250 more employees as a result of the funding, plus open offices in Toronto and Asia by the end of the year. To hire all the data science talent that it needs, Element AI must fill quite the war chest.

The round was also seen as a vote of confidence in Canada’s artificial intelligence ecosystem. One of Element’s key pools of talent and research is the Montreal Institute for Learning Algorithms, which is headed by company cofounder and AI pioneer Yoshua Bengio.

Gagné said that the news came as a “shock” in Canada, and has been well-received by his fellow Canadians.

“The Prime Minister of Canada called me personally to thank me for being an inspiration to other Canadians and making a difference,” he said.

Looking toward the future, Gagné sees Element AI on the public market as a key independent player in the AI ecosystem. Rather than pushing a particular technology or particular stack, the company would be free to provide customers with the technology that makes the most sense for them.