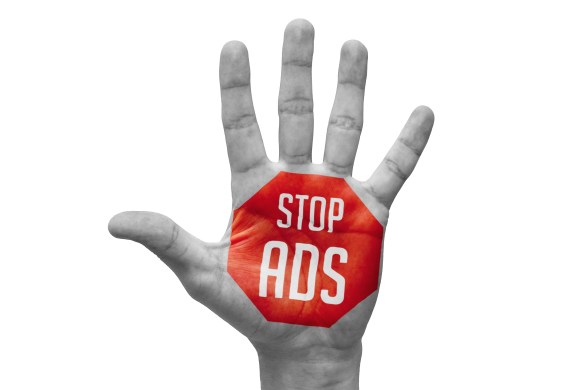 Just as summer’s sear leads to winter’s freeze, the unchecked growth of ad blockers (30 percent increase last year) will lead to a comeback in banner ads.

The reason comes down to why most people install ad blockers in the first place. It’s not for ideology — an obsession with privacy or an anti-capitalist bent — it’s a cost-benefit calculation. The price of an ad blocker is a free, two-minute download, and the benefit is less friction while browsing the web. Good deal!

Recent trends will change those economics and for some, it’s already happened.

The poster-child for bad behavior in digital advertising is the pop-up message. You’re reading an article and, jerkily, your screen changes into something else. You’ve lost your place and your patience.

You installed your ad blocker to stave off interruptions like these, but now ad blockers are the surest way of attracting them. That’s because publishers will tug ceaselessly at your pant legs bawling, “please won’t you whitelist us in your ad blocker!” And these messages will only grow in number and fervor for two reasons.

Ad blocking has been likened to a cat-and-mouse game, where every move from a publisher provokes a counter move from the ad blocking software. Maybe this was the case back when publishers were less motivated and the ecosystem less sophisticated, but today it’s a fight between a cat and a swarm of bees.

It takes less than two hours for a programmer to code and deploy an anti-ad blocking message written from scratch. There are also plug-and-play options for smaller blogs and websites, like one recently from CloudFlare.

AdBlock Plus can go toe-to-toe with a single mega-platform like Facebook, but it doesn’t have the resources to counter the code changes of thousands of smaller, motivated publishers, each with their own techniques and layouts. [Update: And as Johnny Ryan points out, AdBlock ultimately lost the battle with Facebook.]

Ad blockers face another handicap: If they’re too aggressive they could block legitimate content, mess up a site’s design, or provoke much worse publisher retaliation, like speed throttling.

As if keeping up with buzzing publishers wasn’t bad enough, ad blockers will soon face a dragon.

When Google announced it would build ad blocking into Chrome, some took the news as a final death knell for banner ads. Closer inspection shows Google’s target lay elsewhere.

The Chrome ad blocker is a diet ad blocker that targets malware and auto-playing video but leaves normal banner ads intact. That’s good enough for most people and won’t trigger pop-up messages or retaliation from publishers. It’s also what ad blocking should have been in the first place: a compromise, not a mandate.

Ad blocking companies naively imagine a world in which their software will do-si-do with Chrome’s new competitor. Even if we give them that fantasy, they’re missing the second part of Chrome’s adblock tool: site contributions.

Chrome will offer publishers yet another means to launch “please whitelist us!” pop-ups, but this time those pop-ups will be backed by the browser, meaning no extension could remove them even if it wanted to. This tool’s simple existence will go a long way toward legitimizing pop-ups among the hold-outs and making the web an even more hostile place for ad-blockers, subverting their economics.

And when your ad-blocking software causes more and more pop-up messages to appear on your screen, you’ll do what you do whenever a piece of software on your computer gets cumbersome: You’ll click “remove.”

Adam Ghahramani is an independent product and marketing producer based in New York and a frequent contributor to VentureBeat.