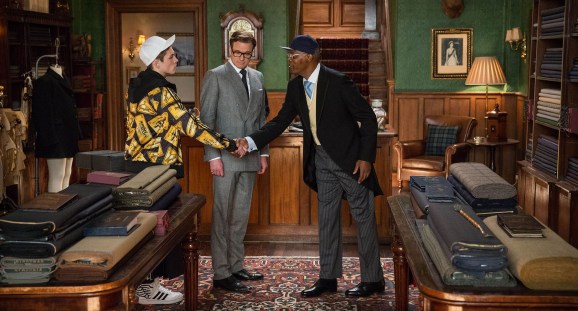 An image from "Kingsman: The Secret Service," a 2015 film based on a Millarworld title. Netflix said it's buying Millarworld.

Some tech giants, like Amazon and Apple, shy away from M&A as an engine for growth. But none can touch Netflix for its bashfulness, which until today had never made an acquisition in its 20-year history. The nature of its first-ever deal says something about how Netflix is changing its content strategy.

Netflix said this morning it bought Millarworld, a comic book publisher founded by Mark Millar that controls titles such as Kick-Ass, Kingsman, and Old Man Logan. The deal gives Netflix rights to Millarworld’s portfolio of characters and stories, as well as new franchises that it will create under the Netflix label. Netflix didn’t disclose the cost of the acquisition, but Millarworld-inspired films have generated nearly $1 billion in box office revenue.

The move echoes a strategy that Disney has employed successfully in the past decade or so: buying Pixar, Marvel, and Lucasfilm to mine their stories and characters to produce franchises of blockbuster films and popular TV series. Those franchises have offset declining profits at Disney’s cable networks. In 2016, operating profit from Disney’s studios rose 37 percent.

By acquiring Millarworld, Netflix is hoping to benefit from a slightly different calculus, one that requires heavy investment up front but pays dividends for years. The company has been shifting away from its dependence on licensed content toward producing original series like House of Cards and Stranger Things. Netflix owns the rights to its self-produced content, instead of having to renew licenses every few years. Owning its content also simplifies the management of content rights in all its international markets.

Two years ago, Netflix said it would aim to have half of its content assets in self-produced shows — a ratio on par with its rival HBO. When the company reported second-quarter earnings last month, it said 15 percent of its content assets were in self-produced programming, up from 12 percent at the end of last year and 5 percent at the end of 2015.

The success we’ve had with our self-produced shows has given us a lot more confidence to expand it. Because we’re a global network, those rights are really important in terms of being able to control our destiny, when we can make shows available and what formats to make them available.

And beyond that, there’s an economic trade-off, which is there’s a big studio margin that we’re able to put on the screen and make better shows when we produce it ourselves. So a show like Stranger Things, when it becomes a big cultural phenomena, we’d like to be able to control the destiny of those brands as we continue to invest in them.

By acquiring a company with a track record of publishing comic books that translate into successful film franchises, Netflix is not only hoping to buy its own Marvel-like hit factory, it’s embarking on a strategy that may increasingly be relied on by its streaming-content rivals Apple and Amazon.

Also this morning, Reuters reported that Netflix, Apple, and Amazon were in talks with Indian film studio Eros, a Bollywood production house with a library of 3,000 Indian films. While Eros has faced some troubles that have led its stock to decline 80 percent in the past two years, the company could offer a suitor a content library to expand in India and reach out to Bollywood fans around the world.

The Millarworld acquisition may be an acknowledgment by Netflix that acquisitions of content libraries that appeal to global audiences could heat up in coming months, just as bidding over licensing for TV and film titles grew competitive over the past decade. When such bidding wars break out, it’s typically the first movers who snap up the better targets at lower prices.

In light of that, Netflix may be shrewd to strike early at deals that could further expand its TV lineup for years to come. Even if it means overcoming two decades of its bashfulness in the otherwise busy M&A market.