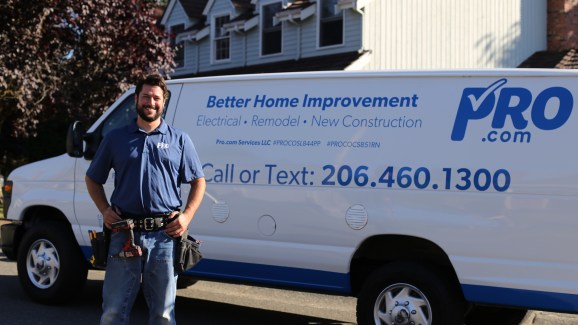 A licensed general contractor, Pro.com provides an online platform for customers to get quotes, book contractors for home improvements, and make payments. The team currently operates in the states of Washington and California, with the majority of the projects being in Seattle and the Bay Area, according to Pro.com founder and CEO Matt Williams.

In each market, Pro.com has its own carpenters, electricians, and project managers on staff in addition to partnerships with several subcontractors. “Our projects range from small home improvements to full home remodels or new construction builds,” wrote Williams, in an email to VentureBeat.

The chief executive declined to disclose customer metrics but claims to have delivered thousands of home improvements, remodels, and new construction projects. He added that the business has grown at a rate of 10 to 20 percent month over month this past year.

Although Pro.com claims to have no competitors, other startups in the home improvement sector include Porch and Houzz, which recently closed a $400 million round.

“Residential housing continues to be the number one financial asset for working Americans,” wrote DFJ partner Bill Bryant. “Over a decade ago, we invested in how consumers purchase their homes through now public Redfin. We invested a year ago in a service that allows these homeowners to maintain their home, in EZhome. Pro.com fills the gap in between.”

To date, Pro.com has raised more than $27 million from investors that include Andreessen Horowitz, Redpoint Ventures, and Jeff Bezos’ investment company, Bezos Expeditions.

Williams worked for close to 12 years at Amazon as general manager in various divisions. Before founding Pro.com in 2013, he was the CEO of Diggs — which was acquired by Betaworks — and an entrepreneur in residence (EIR) at Andreessen Horowitz.

Today’s fresh injection of capital will be used to further develop the platform, expand to additional cities in the U.S., and grow the team of 60.