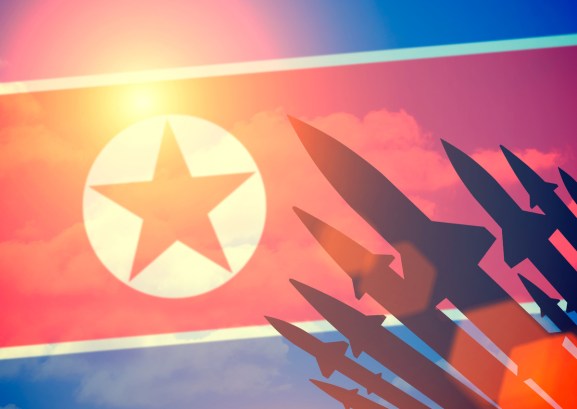 Perhaps the famous phrase “When the United States sneezes, the world catches a cold,” is more appropriate now than ever before. The simmering tensions between the United States and North Korea this week have caused turbulence in traditional financial markets and international stock indices, but it’s having a reverse effect on the value of safe haven assets, particularly cryptocurrency.

As the world comes to terms with a dictator’s threats and a president’s brazen “fire and fury” comments, global markets have entered a major correction. Yesterday, Dow futures and S&P 500 futures were down 0.3 percent, Germany’s DAX and France’s CAC40 dropped 0.7 percent, while London’s FTSE 100 dipped 0.5 percent. Today, they plummeted even further, with all major indices down another 0.8 percent to 1.53 percent. While this is not uncommon in times of major geopolitical turmoil, the value of popular cryptocurrencies climbed at a far faster clip than usual, and far faster than other recognized safe haven assets like gold and the Swiss franc.

The entire cryptocurrency industry performed so well this week, in fact, that today it broke its own record of $125 billion USD. Of course this is only a sliver of the total value of global capital markets, and that’s why we hear so many phrases, laced with equal parts skepticism and jealousy, like “Crypto is so volatile,” “Crypto is a bubble,” and “Crypto is a fad.” This is where I wholeheartedly disagree; there’s no faster growing industry on earth, and in my opinion, and no safer one.

In the past six months alone, the entire cryptocurrency industry has experienced not only record surges in value, but record surges in corporate adoption, real world use cases, enterprise integration, and blue chip R&D. For example, the grandfather of all digital currencies, Bitcoin, has been the best performing currency in the world for four of the past five years. Ethereum has shot up 100x in a year, Ripple is being used by over 75 banks across approximately 27 countries, and Dash will soon be rivalling Venmo and PayPal on a global scale. The key though, for me, is that all of these digital currencies are immune to capital controls and bank freezes and are not linked to a country’s national fiat. Cryptocurrency is becoming a “flight to safety” asset performing exceptionally well during periods of global turmoil.

VB Transform 2020 Online - July 15-17. Join leading AI executives: Register for the free livestream.
In 2015, during the economic collapse in Greece, Bitcoin rose sharply. And in 2013, my business partner was living in Cyprus and operating Bitcoin ATMs when the government went bankrupt and all depositors’ accounts were frozen. There was only one way to obtain any sort of currency. With only one Bitcoin ATM in Cyprus, people stood in lines for hours around three city blocks to access the lone oasis of liquidity in the entire country. Another example is Venezuela. Hyperinflation is so awful there that residents have begun using Bitcoin and other cryptocurrencies over the Bolivar, just to survive, buying daily essentials like food, medicine, and soap. This past June, the Bitcoin trading volume in Venezuela reached an incredible $1.3 million USD. Inflation has been known to triple during times of political unrest, so there’s a great deal of certainty that cryptocurrency will soon spread its tentacles to every corner of the world.

If war broke out between the United States and North Korea, we might not be here to witness the aftermath, but I’m certain of this: In the months before, during, and after, traditional markets will crash, and demand for cryptocurrency will soar. Savvy investors are hedging their bets, moving parts of their portfolio into cryptocurrency, and securing it in hardware wallets for protection.

Trevor Koverko is a Silicon Valley entrepreneur; currently CEO of Polymath, he has also founded DAI and eProf.com. In 2015 his Oculus Rift-based project became the world’s first VR exit. He has since participated in dozens of ICOs and was an original advisor/investor to the Ethereum project.