ProtonMail has unveiled its latest initiative to make its encrypted email services available to the masses, with the quiet rollout of a new Professional subscription tier aimed at businesses.

The Swiss startup was founded out of CERN in 2013 and after a period in beta launched its service globally last March, with the promise of client-side encryption for all. Since then, it has been turbocharging its service with two-factor authentication (2FA) and Tor support. As of June of this year, ProtonMail also offers its very own virtual private network (VPN) service.

Thus far, ProtonMail has offered a free tier with limitations such as just 500MB of storage, while the Plus and Visionary plans — up to $5 and $30 a month respectively — offer extra features, such as more storage, additional email addresses, and custom domains. With the new Professional tier, ProtonMail has now tailored its pricing and feature set specifically with businesses in mind.

On the surface, there isn’t a great deal of difference between Professional and Visionary in terms of features — they each offer custom domains, unlimited folders, labels, email filters, autoresponder, and more. But digging down into the details reveals some notable new tools. 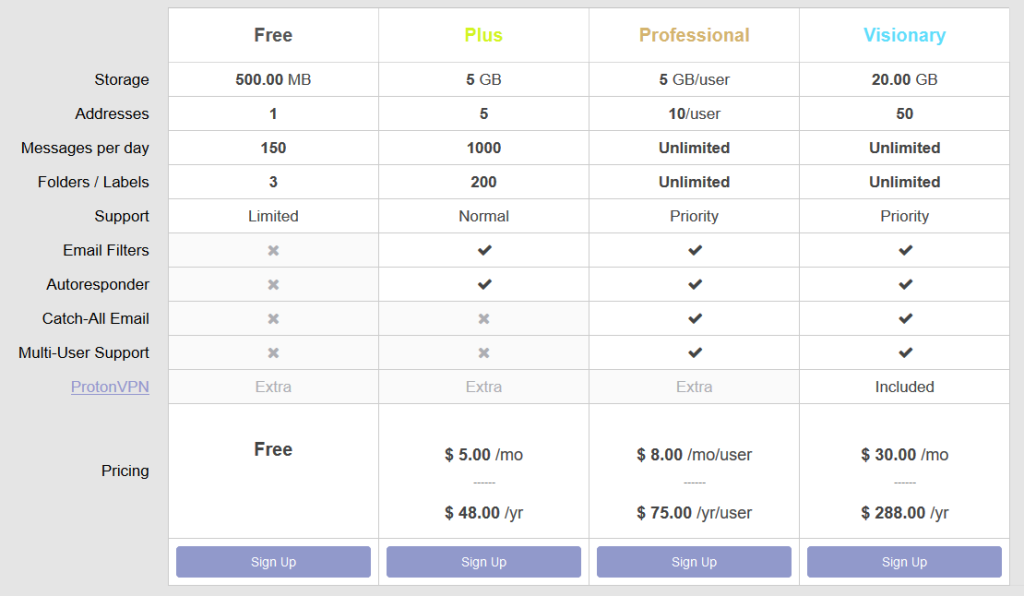 Rather than relying on employees to set up their own email addresses, ProtonMail Professional lets companies set up individual user accounts for anyone in the company through a central hub that’s managed by assigned administrators. From within this hub, admins can create and delete accounts, reset passwords, re-allocate storage space, and more.

This, according to the company, has been an oft-requested feature. “ProtonMail Professional brings with it a much demanded feature that a lot of people from the ProtonMail community have been asking for since the very beginning,” the company said in a blog post.

It’s worth noting that many companies may be reluctant to ditch their existing email subscriptions with the likes of Google due to the myriad additional services they enjoy — such as shared calendars and cloud productivity tools, and the fact that G Suite only costs between $5 and $25 per user per month for everything. ProtonMail Professional costs $8 / user per month when billed monthly, or $6.25 / user per month when paid annually. But with privacy a growing concern in the business realm, some companies may consider making the switch.

Then there’s the issue of data migration. Companies will probably want to shift all their existing email data over to ProtonMail, but the service doesn’t yet offer the tools to enable this migration, so organizations will have to fend for themselves on that front for now. ProtonMail does say that it’s looking to release migration tools sometime in 2018.