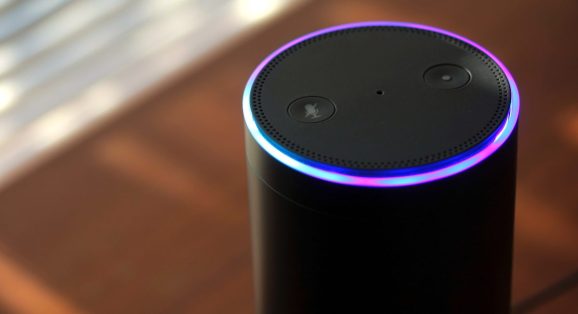 Even if you don’t own one of the devices, you’ve probably heard of Alexa, the digital assistant that powers Amazon’s Echo line of devices. Alexa is one of the better AI assistants out there, capable of understanding thousands of commands to do almost anything you can imagine — play music, deliver sports scores, read the weather forecast, control smart home appliances, and more. If you want your favorite dinner playlist to start playing while you cook, Alexa can do that. Alexa can even tell you the weather and start your coffee before you leave your bed.

Alexa powers the Amazon Echo, Amazon Echo Dot, and Amazon Tap. The Echo is a tower device with a built-in 360-degree speaker that allows it to double as both a command center for your home and a sound system. The Echo Dot is a smaller version with much less impressive sound that pairs with an external speaker. Amazon Tap is a similar device that is meant to be portable, trading the always-listening feature of the Echo for battery power.

Fire TV is Amazon’s smart TV solution, and it comes in two forms. The standard Fire TV is a small box that you connect to your TV to stream Netflix and Amazon Instant Video and to use other apps. The Fire TV Stick is a similar device, but instead of a box, it’s a small dongle that plugs straight into your TV’s HDMI port.

The latest update gives the Alexa smart assistant the ability to control your Fire TV, meaning you can now leave the remote on the coffee table and “tune in” using only your voice. The feature uses the Echo’s far-field voice detection, which can pick up your voice from across the room — even over background noise, like your TV — to allow Alexa to open apps, start a favorite show, pause playback, and more.

If you have a Fire TV Edition smart TV, you can also pair it with Alexa and gain additional benefits, like the ability to control the volume and change the channel. Lastly, you will soon be able to use Alexa to route the feeds from smart cameras to your Fire TV. Alexa will work with a wide variety of smart cameras from manufacturers like Nest, Ring, and August.

While the Fire TV remotes already feature voice control, using Alexa via the Amazon Echo makes it a hands-free experience. No more having to hunt for the remote or walk across the room to grab it if you left it on the counter. Now you’ll be able to control the TV from anywhere in the room, regardless of what you’re doing.

This is one of those super convenient features that you don’t realize you need until you try it. Having the ability to say “Alexa, pause my show” while you get up and walk into the kitchen for snacks quickly becomes second nature, and it’s tough to go back. The experience of using Alexa on the Echo is so smooth and intuitive that it’s honestly surprising this wasn’t already a feature.

The ability to view smart camera feeds on the TV will also be particularly useful if you own a doorbell camera. Imagine someone rings while you’re watching a movie — you’ll be able to pull up the feed and see who it is without even leaving the couch.

Amazon’s Alexa continues to take smart technology further into the realms of comfort and convenience at home. Taking over voice control for connected devices places the Echo at the center of a home’s smart technology, with almost limitless possibilities going forward. Companies can focus on specific smart devices while allowing Alexa to take over the accessibility controls. Each smart device won’t need a home or hub to be fully functional, just the ability to sync with Alexa.

The far-field TV control is available for all Fire TV and Echo owners right now. Amazon says control of the Fire TV Edition smart TVs should be here shortly, while the camera features will be arriving soon. If you have an Echo and Fire TV, go check out the new features. And if you don’t own these devices, maybe these new features will be a compelling reason for you to pick them up.

Cosette Jarrett is the guest post editor over the AI and Transportation channels at VentureBeat.