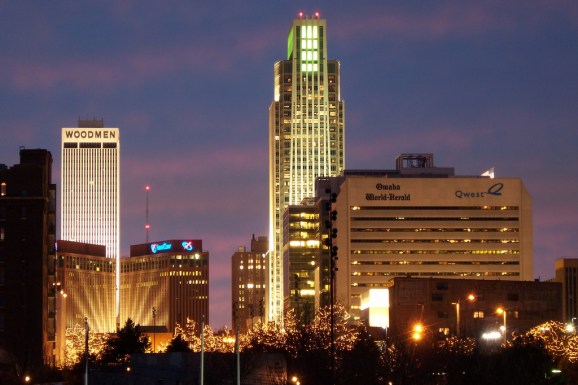 According to data from the Greater Omaha Chamber, entrepreneurs in Omaha make $63,000 more on average than they would on the coasts.

On Christmas Eve of 2015, Kim Perkins was helping to unpack a moving truck that had just brought her family from California to Omaha. Perkins and her husband, Lorenzo Staunovo Polacco, moved to the Midwest in the heart of winter to pursue their tech careers in the Silicon Prairie.

“We decided to move to Omaha as Lorenzo switched back to managing Global Finance for Yahoo, and I opened the C1X office here in the Exchange building on the 8th floor,” said Perkins. “I made the argument that there was something out here.”

Earlier in 2015, Perkins was working as the Chief Product Officer and Business Development lead at C1X, and Lorenzo was running Ad Operations while working on his MBA. The idea for their first startup, Memosnag, came about while he was tracking citations for his online research.

“He was having trouble and asking his classmates from around the globe what they were doing to make sure they got their citations right, and there wasn’t a good answer,” said Perkins. “Memosnag was born from that question and since then, we’ve been working on a product and trying to grow users simultaneously.”

While Perkins was working at C1X, taking on many roles within the company and getting into the entrepreneurial flow, Polacco was making strides with Memosnag. Having been dividing her time between the two companies, Perkins made the jump over to Memosnag full-time in May 2017.

“I’m very confident that Memosnag is making people’s lives better and improving their daily lives online,” said Perkins. “We are finding users all over the world saving all sorts of information, from interests and hobbies to shopping, travel wish lists, development code samples, and marketing collateral.”

“I’ve been doing a lot of research and interviews trying to understand who the customer is and how we’re providing value,” said Perkins. “B to C is new to me so it’s been helpful working with The Startup Collaborative.”

She is currently working on Memosnag’s user acquisition goal as part of their program at The Startup Collaborative.

“We have an aggressive growth goal,” said Perkins. I’m working on growing from 500 to 2500 monthly active users in 6 months.”

She knows it’s a tough goal, but assistance and support from The Startup Collaborative and other entrepreneurs are what Perkins and Polacco moved to Omaha for.

“Coming from the Silicon Valley, it was a soft landing,” said Perkins. “It’s just nice to see that kind of encouragement for entrepreneurship where in the Valley, there’s so much competition and to get an edge, you have to […] know people who can help you.”

In addition to the tech startup scene, Perkins also said things like the lower cost of living and cutting her five-hour daily commute down to an hour has allowed her family life to thrive.

According to data provided on behalf of the Greater Omaha Chamber, Perkins and Polacco aren’t alone in their decision to move. Statistics show that the number of entrepreneurs in greater Omaha has increased by more than six percent over five years and those entrepreneurs are earning more than they would have on the coasts––on average, $63,000 more.

Perkins knows there’s something unique happening here because she’s worked in various communities all over the globe. She never anticipated ending up in Omaha but always had a sense that she might end up in the Midwest after learning more about it.

“I think because there are opportunities, from a career perspective, and also just a good life,” said Perkins. “I went from doing business in Dubai to doing business at 19th and Harney – and it’s a choice I was happy to make.”