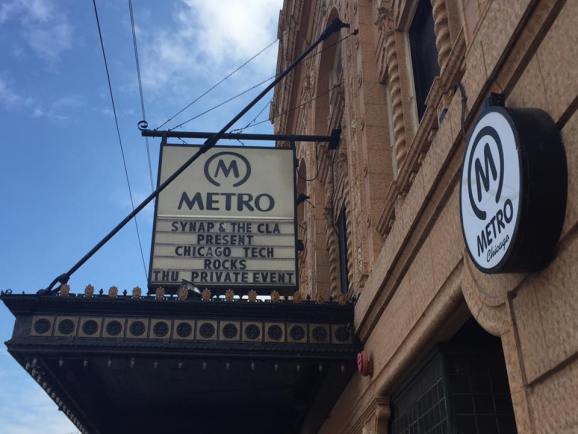 Now, the concert, Chicago Tech Rocks, is returning for an encore performance — and this time, it’s going to be “even bigger, better, louder, and cooler,” according to Synap CEO and CTR Executive Director, Jeremie Bacon.

CTR will return to Wrigleyville’s Metro stage on September 28, 2017, hoping to drive awareness and raise money for nonprofits developing a diverse pipeline of next generation technology talent in Chicago. These beneficiaries, which are project-based learning programs and non-profit schools with a focus on STEAM (Science, Technology, Engineering, Arts & Math), include Chicago Tech Academy, ITA Tech Forward, Geek League, and Highwater Robotics.

“Every growth stage tech company in Chicago recognizes access to diverse talent as a major constraint towards continued success,” said Bacon. “While we have more jobs available than qualified tech talent in Chicago, we also have amazing educational institutions working to reduce this gap. CTR is designed as a fun platform to help support these organizations.”

CTR’s fundraising goal is $200,000 for this year, and for that it has recruited Bacon’s own band Bottle Rocket, along with another local Chicago band, The Noise FM, and Lollapalooza 2017 performer PUP as the show’s headliners. The evening will feature short introductions from the beneficiary organizations in between the performances to explain their missions and purpose, and will also feature a short performance from the ChiTech Academy’s student drum line.

While last year’s show raffled off a Tesla, this year CTR is selling raffle tickets with 33 percent of all proceeds to be split evenly three ways to purchase “Dream Concert” packages of the winners’ choice. Raffle tickets are available at $15 a piece, $36 for a 3-pack and $100 for a 10-pack. Tickets to the concert itself are $85 for general admission and $125 for a VIP ticket, all of which are available on CTR’s Eventbrite page here.

Apart from Synap, several local Chicago companies are supporting and sponsoring the event, including kCura, TechNexus, SpringCM, Trading Technologies, SongFinch, Shure, and ZokuVault. 2112-based music startup SongFinch, for example, is partnering with CTR by allowing users to buy personalized “radio-quality” songs on its platform and donating $25 for every purchase. Additional individuals, organizations and companies looking to support CTR can learn more and contact Bacon directly here.