What seemed like a simple case of retaliation against a right-wing hate site has turned into a debate over who really dunnit.

A post appeared on The Daily Stormer claiming that the hacking collective known as Anonymous managed to break into and seize control.

“THIS SITE IS NOW UNDER THE CONTROL OF ANONYMOUS,” the alleged hackers wrote. “WE HAVE TAKEN THIS SITE IN THE NAME OF HEATHER HEYER A VICTIM OF WHITE SUPREMACIST TERRORISM. FOR TOO LONG THE DAILY STORMER AND ANDREW ANGLIN HAVE SPEWED THEIR PUTRID HATE ON THIS SITE. THAT WILL NOT BE HAPPENING ANYMORE.”

The alleged hacking came on the heels of a weekend in Charlottesville that saw a right-wing protest turn violent and result in the death of a counter-protester. Later in the morning, the site’s founder, Andrew Anglin, claimed to have regained control.

“Some group from ‘Anonymous’ hacked our server and took control of the site for several hours while I was sleeping, having been deprived during the Charlottesville event that I was covering around the clock,” Anglin wrote. “I’m just leaving their post up. It just goes to show that these people cannot do anything to us other than try to shut down our free speech.”

But not longer after, doubts were being raised about whether Anglin had created a fake hack to stir up sympathy and stoke Jewish conspiracy theories. The news about the hack came shortly after GoDaddy announced it was booting the racist site off its system. And the references in the post to “united in the defense of the Jewish people” as being interpreted as an attempt to stoke anger of Daily Stormer’s audience and its belief in widespread Jewish conspiracies.

If goal of Daily Stormer was to get us to celebrate a BS claim, it backfired. Seriously, suck less.

Indeed, Anglin’s tale of how the site was saved, is, well, pretty fantastic, and involved flying team members into remote parts of Africa to repel the hack and being attacked with surface-to-air missiles by Sudanese rebels.

For now, here is the alleged hackers’ entire message: 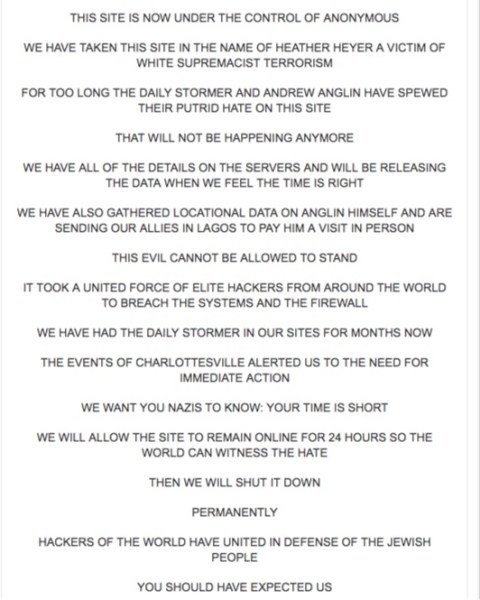 And the site’s metadata remains altered, whether it was done by hackers or Anglin: