President Trump today belatedly offered a direct condemnation of white supremacists and Nazis following the eruption of violence at a Charlottesville protest and subsequent murder of a counter protestor.

OK, fine. But what about the tech industry? Once, there was a utopian fantasy that the platforms and systems being built on the back of the internet would bring about greater communication and understanding and harmony and all sort of kumbaya crap.

Instead, your favorite sites have become a cesspool of racial hatred and organizing tools that have enabled the far-alt-right-Nazi-whatevers to connect and surge confidently into public view. Silicon Valley’s traditional response has been to sit back, fold its hands, and say, well, gee, we’re just open platforms and we support free speech and wax all sorts of mealy-mouthed platitudes about staying neutral.

The result is that on Facebook, this infamous post by neo-Nazi site The Daily Stormer was going viral on Monday: 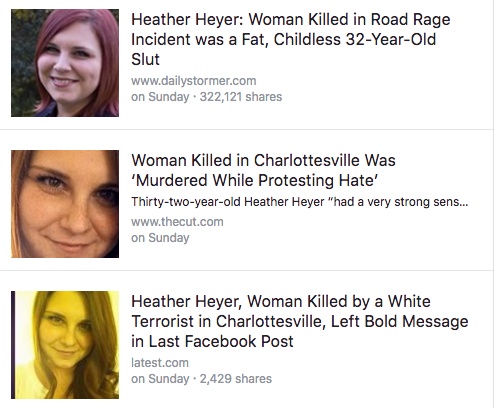 This was the post written by white supremacist Andrew Anglin that got The Daily Stormer kicked off GoDaddy, months after other users had complained about the site’s vile, racist content. Google today refused to let the site move its domain registration to its services.

Though you can still go to Google’s YouTube and watch all sorts of hate-filled videos posted by Anglin.

Why did it take months for a site that regularly writes anti-Jewish rants to be labeled in violation of GoDaddy’s terms of service?

Reddit, despite attempts to clean up its act, is still littered with white supremacist sub-reddits. Which doesn’t seem to bother the venture firms that recently invested $200 million in Reddit, including Andreessen Horowitz and Sequoia Capital.

Of course, some services are taking a stand:

But it’s not enough. It’s not just about building the right tools. And it’s not really a debate about free speech.

For the moment, it appears Silicon Valley lacks the courage to do either one.