A little after noon on Thursday, August 3, a micro-rocket — a 40-foot tiny satellite designed to carry very small loads into low orbit — quietly blasted off from a county on the coast of Georgia. The launch was a first for Arizona-based space flight startup Vector, as well as for the state of Georgia. Since the 1960s, any space launch activities that took place in the South have been concentrated in Florida.

But Georgia state officials, who see opportunity in the growth of commercial aerospace companies, including space startups, are trying to change that.

This launch was part of a push to get Spaceport Camden, a proposed launch site (think of a spaceport like an airport for rockets), designated as an official Federal Aviation Administration (FAA)-approved site. 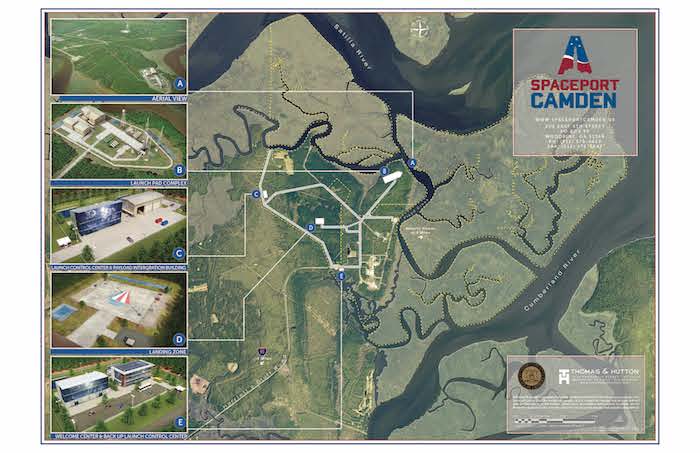 Camden County is located close to the Florida border in the southeastern corner of Georgia. Its population is a little over 50,000, about twice the size of the Georgia Tech student population.

Vector is just one of hundreds of startups capitalizing on the growth of the private space industry. The global space economy is already worth over $300 billion. The federal government left a gap with NASA’s exit from the shuttle launch business; all cargo going to and from the Space Station is outsourced to private companies. Space tourism is becoming an attainable prospect. All of this opens up opportunity for private space startups.

Georgia’s first step was HB 1, informally known as the Georgia Space Flight Act, signed by Governor Nathan Deal this May. According to Spaceport Camden project lead and Camden County Administrator Steve Howard, this was critical in showing that the state is dedicating resources to space flight. 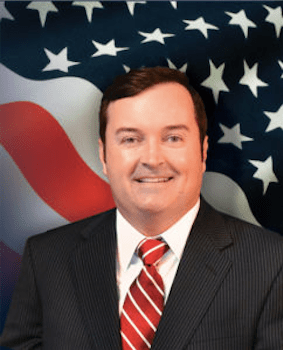 “It shines a good light on space within Georgia, because that legislation is just not for Camden. In a sense, it’s a clear signal that our state is open for business,” said Howard.

“You’re really seeing a new Renaissance with the new space race,” he added. “What an opportunity to play a part of it. And I think the sky’s wide open for Georgia to be able to really play an active role in the space race.”

It’s much easier and faster for private companies to go through commercially owned spaceports than federal sites. The FAA has licensed 10 spaceports in seven states, but there are only three on the East coast thus far — two in Florida and one in Virginia.

Though Spaceport Camden is not yet an officially designated spaceport, the FAA allowed the low-altitude launch as long as the rocket remained within Camden County property.

But Howard says Spaceport Camden could see official designation as early as this fall. The FAA considers a host of considerations when examining potential spaceport sites, including national security policy, public safety and health, financial responsibility, and environmental impact. Officials are going through that process now. 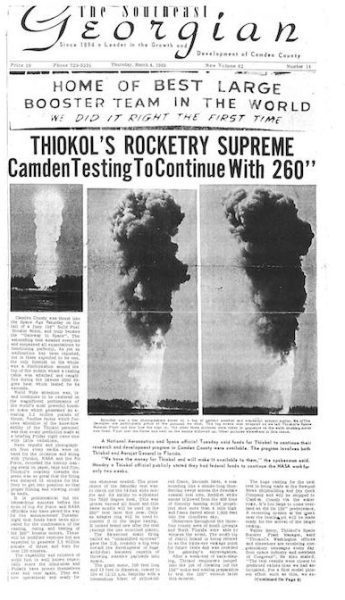 Spaceport Camden has history on its side. According to Howard, recently declassified documents show that Camden was considered for a NASA launch site for the Apollo moon missions in the 1960s. It was also used by NASA for ground-based static fire testing. “The history and local connection to space is pretty rich already,” said Howard.

Most recently, however, the site has been used for pesticide manufacturing. Howard sees this as an opportunity to bring the property back to its space roots.

Georgia is also already a leader in the aerospace industry, even without its own spaceport. Aircraft and related parts have been Georgia’s number-one export for over five years. The state consistently ranks in the top 5 overall for aircraft manufacturing and is the leading manufacturer in the Southeast. Over 172,000 individuals are employed in aerospace-related occupations in the state, with giants like Gulfstream Aerospace, Lockheed Martin, and Boeing employing thousands.

“I started seeing some of the numbers about aerospace in the state — and you see the opportunity to have a strong foundation to fill the space sector,” said Howard. “On the talent side, at Columbus State University we have the only science center dedicated to space exploration. And then you look at the military transitioning out of our bases; I was just talking to a Navy individual that does quality assurance, he was saying keep me in mind for a job — you don’t get any more top-notch than that.”

Howard suggests the spaceport will retain talent. Georgia Tech’s Guggenheim School of Aerospace Engineering is the largest aerospace engineering program in the U.S., but many graduates leave the state upon graduation. A more robust industry could slow that brain drain.

“This is about Georgia’s next generation — the opportunity to be able to show people that we can employ some of the brightest thinkers in Georgia,” said Howard. “And it’s not just about jobs. It’s about the STEM workforce pipeline; it’s about inspiration, exploration. Schoolchildren can visit the site, get inspired to be the next great leaders in STEM. They can experience a launch.”

In addition to direct jobs, Howard points to the opportunity for growth in industries like tourism.

“I’m envisioning an opportunity for a museum, for hotels for folks that want to come and watch a launch,” Howard said. “Even working with Vector showed us — they were here for over a week, two dozen engineers and staff. They were in hotels, they were out interacting or eating. All that equates to opportunities within the community.”

Howard said the partnership with Vector began with a simple inquiry from the startup. Vector’s team, which includes alumni from SpaceX, Virgin Galactic, Boeing, Sea Launch, and VMware, has said that their goal is not to re-invent the wheel when it comes to rocket design. Instead, they want to scale their micro-rocket launches, which are far less expensive than a traditional launch. Even the relatively (for rockets) low cost of $62 million to launch a SpaceX rocket doesn’t compare to Vector’s goal of under $3 million per launch. 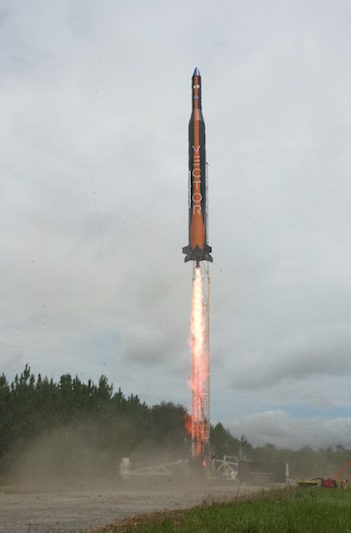 Vector, which plans to start commercial service next year, aims to complete hundreds of these micro-satellite launches a year. Howard said the relationship between Vector and Spaceport Camden will continue.

“A year ago I got a call from some Vector folks and we just built that relationship,” said Howard. “We had the opportunity for them to come to Camden in March to get to know each other a little bit better, see how we both operate, and that was very positive. We continue to build upon that and were able to accomplish this next goal.”

Though this rocket didn’t actually reach orbit, Howard said it was valuable to experience what future launches would require from an operational standpoint.

“Along with a great opportunity for us to get to know each party a little bit better, this also showed what it takes to prepare for when the launch is going to orbit. There’s a lot of coordination, a lot of effort that goes behind the scenes. So this was a great, great opportunity to actually prepare us for the next steps when we ultimately become a licensed spaceport.”

“There’s an old saying: ‘You have to kiss every frog’. I kiss every rocket,” said Howard.

“I always tell people when you drive through Camden one day, we’ll be thrilled to say ‘Welcome to Georgia Space Coast’. When they come to Camden and the coast of Georgia, they think Southern hospitality, think peaches, onions, and now think rockets.”