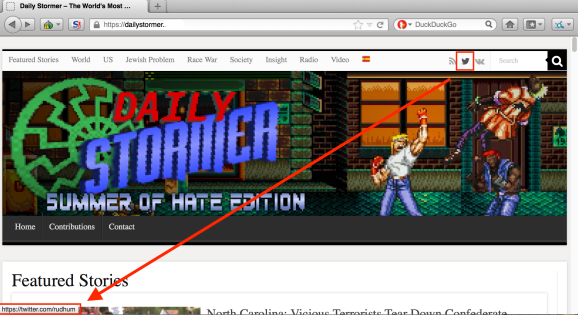 The right-wing hate site Daily Stormer has returned to the web with a Russian domain.

In the wake of the racial violence by Nazis in Charlottesville last weekend that left one woman dead, GoDaddy booted the site off its service. Daily Stormer attempted to register on Google before that company also blocked it. The site then moved to the so-called Dark Web, where it was accessible only through a Tor browser, before being blocked there and going dark as well.

But this morning, it re-appeared on the regular web sporting a .ru address:

Site founder Andrew Anglin seemed to imply in a post that it had found a Russian registrar, though it’s unclear if that is in fact the case.

Anglin also made what we can only assume is a completely absurd claim that President Trump personally interceded on the site’s behalf by calling Russian president Vladimir Putin.

On the other hand, these are strange times.

UPDDATE: Stormer was taken offline again after a Russian agency said that as a neo-Nazi site, Stormer violated laws against extremism. For now, Anglin said he would post articles on alternative social networking service Gab as screen shots until he can find another solution.