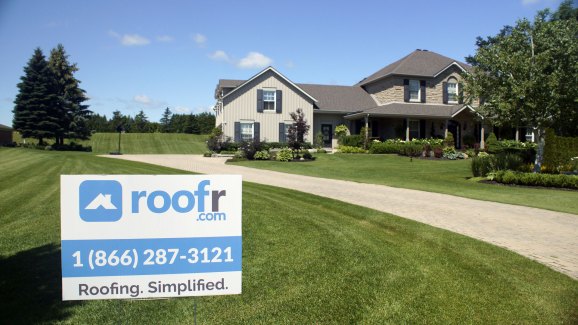 Roofing may not be the sexiest thing to think about, but having a solid roof over your head is vital, especially in earthquake-prone places like San Francisco. Roofr, which will be graduating from Y Combinator (YC) next week, developed a satellite imagery software that analyzes the state of your roof to determine whether it needs to be replaced.

“Homeowners usually need a new roof because it’s leaking, shingles are falling off, or it looks worn out,” said Roofr founder and CEO Richard Nelson, in an exclusive interview with VentureBeat. “Traditionally, you would look through Angie’s List or Yelp and call multiple roofing companies for quotes, but you never know what you will pay and the process is extremely tedious.”

The Toronto-based startup offers customers a free online quote using its satellite imagery software, which takes the square footage and slope of the roof. It is currently using a Google API to capture satellite images from Google Earth.

The team then connects customers with vetted contractors who provide full replacements for any type of roof, including cedar, slate, and metal. A new roof costs approximately $6,000 and is expected to last about 10 years. Roofr charges contractors a small fee every time they do a job through the Roofr platform.

The startup claims to have 200 roofing projects under its belt, selling approximately 10 roofing projects per week. It has grown its customer base in Canada and is planning on expanding to the U.S. market — it will be relocating its headquarters to Mountain View, California in the next two months.