If it’s August, then it’s mostly definitely rerun season. Now playing on the internet: the episode in which everyone freaks out that young people are abandoning Facebook in favor of hot new social media services like Snap and Instagram.

This episode was first broadcast in 2013, when CEO Mark Zuckerberg acknowledged that growth among youngsters was softer than expected. This prompted apocalyptic hand-wringing: 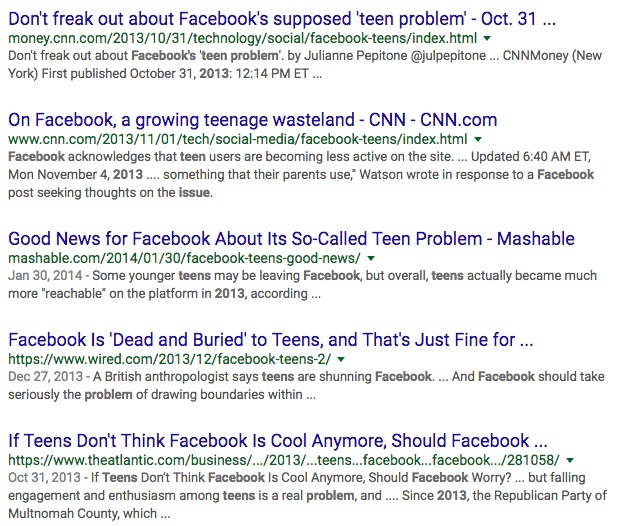 Let me kill the suspense for you. Such talk proved overblown, and in 2017 Facebook has 800 gazillion users, give or take a continent.

But today, eMarketer once again fanned these teen flames when it released a report (dated two days from now) in which it says: “Facebook’s appeal fading further among teens and young adults.” Gack!

Specifically, it seems to be those pesky kids in the U.S.:

eMarketer has reduced its usage estimates for US monthly Facebook users ages 12 to 17 and 18 to 24. Yet for the same age groups, we have kept unchanged or adjusted higher our usage estimates for Snapchat and Instagram, suggesting younger social network users are turning away from Facebook in favor of other platforms.

In the report, eMarketer says Facebook’s user count for people ages 12-17 will drop 3.4 percent this year compared to 2016. This would be the second annual drop, according to eMarketer, and larger than the 1.2 percent from 2015 to 2016. On top of that, the report says growth for users under 12 and over 18-24 will be slowing.

(Note: Facebook’s terms of service still says you have to be 13 years old to create an account.)

“We see teens and tweens migrating to Snapchat and Instagram. Both platforms have found success with this demographic since they are more aligned with how they communicate — that is, using visual content. Outside of those who have already left, teens and tweens remaining on Facebook seem to be less engaged — logging in less frequently and spending less time on the platform,” said eMarketer senior forecasting analyst Oscar Orozco in a statement. “At the same time, we now have ‘Facebook-nevers’ — children aging into the tween demographic who appear to be overlooking Facebook altogether, yet still engaging with Facebook-owned Instagram.”

Of course, Facebook bought Instagram in 2012, and eMarketer said it increased its forecast for Instagram to 23.8 percent in 2017. And while Snapchat has been beleaguered since its IPO earlier this year, eMarketer did offer some hopeful news by increasing its short-term outlook for Snap user growth.

But eMarketer also offered this downer for Snapchat: “eMarketer has also lowered its longer-term growth prospects for Snapchat to reflect Instagram’s seeming success at wooing younger users with Snapchat-like features.”