Insta360 has launched the One, a 4K, 360-degree video camera with a unique feature that allows you to shoot the video first and then set the point of view later, during postproduction.

The Los Angeles startup said the FreeCapture technology on the camera is a breakthrough in immersive storytelling, allowing people to capture and share framed video in a new way.

“We set out to make the easiest-to-use, most versatile 360 camera in the world, and the One is the result of those efforts,” said JK Liu, CEO and founder of Insta360, in a statement. “The One isn’t just a step forward for 360 videography. With its unique FreeCapture technology, it stands to change the way we think about cameras in general.” 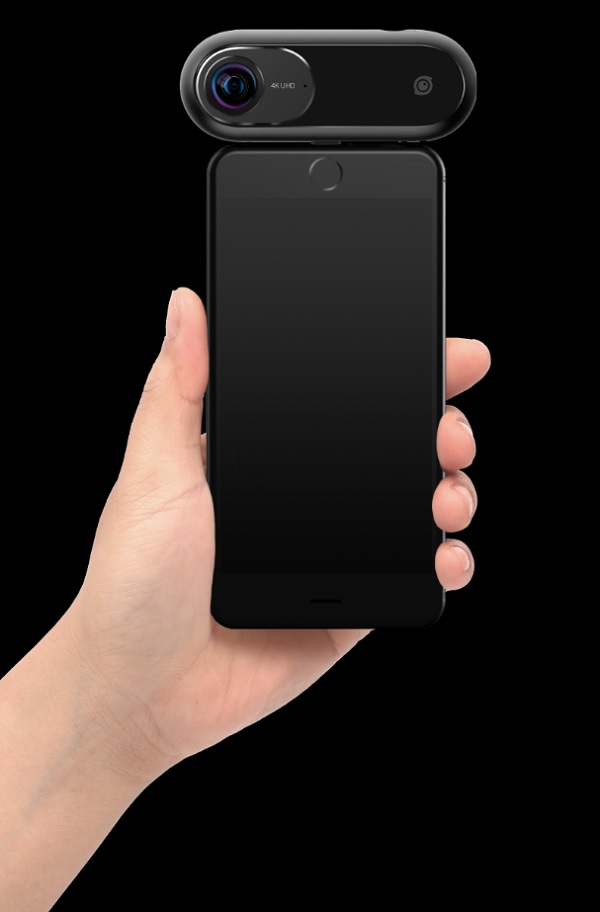 Above: Insta360 works with an iPhone.

The Insta360 One shoots 360-degree photos at 24 megapixel resolution (6912 x 3456) and videos at 4K. It offers three modes of operation: stand-alone, remote control via Bluetooth, and control via a direct connection to a smartphone’s charging port.

The iPhone-compatible version is available now, with an Android version on the way.

Liu said the FreeCapture technology lets you hone in on the key moments of a spherical video, translating the original 360 footage into a standard 1080p fixed-frame video. You can do the editing on a smartphone.

First, users hit record and capture every detail of an experience, as though they had a multi-cam setup covering every angle of the scene. Then, when they’re done filming, they connect the One to their phone and offload the experience. Leveraging a phone’s onboard gyroscope, FreeCapture then lets users simply peer into the original 360 scene using their phone display as a viewfinder.

Whatever they see as they point their phone into the original experience is what they’ll capture in a fixed-frame video. In other words, users can stand in the present moment while they film a past experience — using the same hand motions they would ordinarily use to capture a video on their phone.

The smartphone editing technique lets anybody — from a journalist to an outdoor adventurer — effectively act as their own camera crew. You can shoot footage with a selfie stick, and then the stick is automatically erased from the footage, making it appear as if you’ve shot an image from a flying camera.

The One has six-axis image stabilization, which makes possible a new bullet-time mode. Using only a selfie stick or a length of string, creators can capture up to 240 frames-per-second slow-motion shots, where the One circles the shooter.

The camera shoots at a maximum speed of 120 FPS, while 240 FPS video is achieved algorithmically with the companion app. It costs $300 and comes with a two-in-one case, camera stand, a microSD card, a cable, lens cloth, and string attachment.