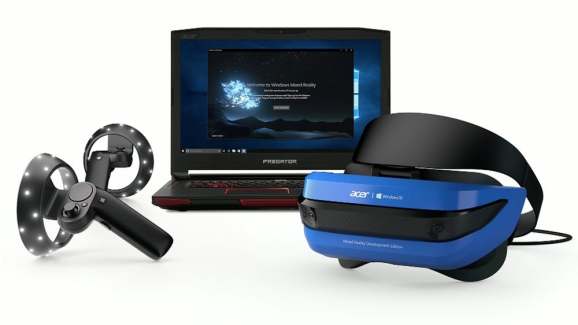 VR has sprouted a lot of startups, but not a whole lot of revenue yet. But as console headsets get closer to plug and play and mobile VR and mobile 360 grow more popular with consumers, it’s time to start thinking about monetization. Join our latest VB Live event to learn more about where to start, and how to make it work.

After two years in the field exploring VR and AR tech, experiencing content across consoles and talking to entrepreneurs and industry giants alike, Charlie Fink, VR columnist for Forbes, thinks that virtual and augmented reality is one of the great business stories of our time — and the slow pace of adoption isn’t a shocker.

The creeping growth of personal computers into consumer homes sparked papers with titles like “Give PCs a Chance.” Contrast that to the rate at which consumers leapt first onto cellphones and then smartphones and mobile commerce, and it looks like a pattern of accelerated user adoption as technology gets more and more sophisticated — so why is VR the exception?

“I think everyone overestimates the short term and underestimates the long term,” Fink says. “I don’t think there are floodgates for VR; I think there is a slow and steady growth that will look like the personal computer. Because of wearing glasses and headsets, we’re asking people to do something entirely new that they’re not doing today. In effect, we’re selling Pepsi to people who don’t know what a soda is.”

Adoption of headsets is going to be slow, and people have to be prepared for that, Fink says. The companies making a play for fully occluded virtual reality, like HTC and Oculus, have very deep pockets and have a keen understanding of the amount of patience that’s required before they break even on the hundreds of millions of dollars a year they’re pouring into research, development, and marketing — never mind making a profit.

But it’s clear, he says, that unlike in the 90s when virtual reality first burst onto the scene, this new revolution is poised to happen, despite the major obstacles, the largest of which is the fact that VR is just not a plug and play consumer product.

“The problem is the high-end gaming computers which are not only expensive, but very difficult to configure,” he explains. “Very often it’s a nightmare to set up. If you bought a headset and a gaming computer and you were a normal consumer, you would be back at BestBuy a week later, really frustrated and pissed off and wanting your money back.”

He points out that customer service is thin on the ground as well. Gamers with tech experience can hunt down message boards and get troubleshooting advice from other members, but that’s not a thing that regular consumers can do — or should do.

But there are advances right at hand, and they will be the first game changers and the winners in the end, he says.

There will be steps in between that will suck up a lot of attention over the next two years, he predicts, especially around augmented and mixed reality.

“This fall, there’s going to be a game changer — Windows 10 MR — which is not going to require a high=end computer,” Fink says. “Then we’re going to see some interesting devices coming online for Christmas. The standalone device for Google Daydream is very compelling. HTC is making one, as well as Lenovo, and any one of these things could start accelerating things.”

But currently there are only 2,200 simultaneous VR users in any social space in the world at once right now, and only 20 million machines in the world. In the meantime, advertisers, marketers, and sales people have an incredibly powerful marketing tool in their hands. VR and AR can be leveraged to immerse customers in emotionally connected sales experiences. From sitting inside your completely customized vehicle at the car dealership before it’s ever built to demonstrating the power of your applications at a trade show, VR is sexy enough to grab consumer attention.

“In the short term I think it’s about using VR as a tool in the pursuit of larger strategies, because VR itself is not the moneymaker,” Fink says. “The moneymaker itself in this case would be letting people choose a higher-end interior for their car.”

In the long term, the combined brainpower bent toward making VR accessible and lucrative could power a major European city, so the end is more nigh than it seems.

“When will it be plug and play? I think we’re making progress,” Fink says. “You need some courage, and to be patient until the audience arrives.”

To learn more about the future of VR and AR, where the industry is headed, and how to monetize it when it arrives at your doorstep, don’t miss this VB Live event!

In this VB Live event, you’ll learn about: