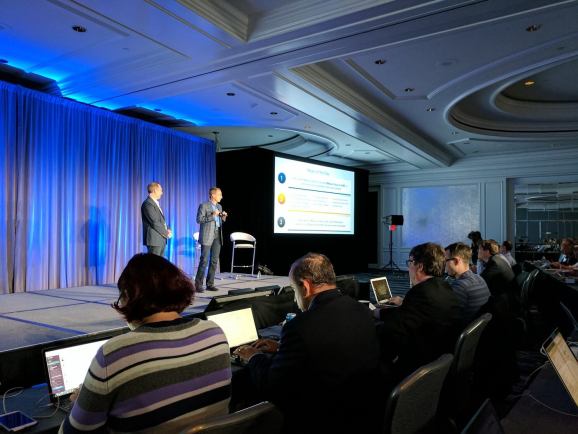 VMware customers who want to run their workloads in the cloud without leaving behind the software they know have a new service available to them. The highly anticipated VMware on AWS offering is finally generally available to customers.

Administrators will be able to pay VMware to run applications on AWS using its Software-Defined Data Center stack, which includes the vSphere management tool. The service is supposed to provide an environment that’s as consistent as possible between on-premises data centers and the cloud in order to offer customers a path to modernize their applications.

One of the key benefits for customers and the companies involved is that users can access the full suite of AWS cloud services in addition to running their applications using VMware software. That means it’s possible for businesses to kick the tires on services like AWS Lambda without moving their existing applications off software they’re used to.

In the short-term, this is a win-win for AWS and VMware. VMware gets to offer its customers a path to the cloud using its stack of services, as application modernization efforts and overall computing trends shift in that direction. AWS gets a stronger play in the hybrid cloud space that will allow it to compete more effectively with the likes of Microsoft Azure and IBM.

Customers have shown a great deal of interest in the VMware Cloud on AWS offering. Over 1,000 customers requested access to the private beta, which the company announced last year. Of those who applied, 50 were allowed to join.

Running infrastructure on AWS through VMware costs $8.3681 per host per hour in Amazon’s Oregon region. Each host includes a total of 36 CPU cores across 2 CPUs, 512 GiB of RAM (1 GiB is roughly 1.074 GB), and local flash storage. Customers need to pay for at least four hosts in order to use the service.

VMware also plans to offer companies the ability to reserve capacity for one year or three years, in exchange for a 30 or 50 percent savings over the on-demand price, respectively. All of that pricing doesn’t count network bandwidth or IP costs, which are billed separately according to Amazon’s existing pricing.

Connecting on-premises assets to a VMware Cloud on AWS environment requires the vSphere 6.0 management software, which is years old at this point. As such, most enterprises should already have software that’s compatible with the new cloud service.

The announcement comes as part of VMware’s massive VMworld conference in Las Vegas, where the company announced a whole host of other news. Among new offerings is a VMware Discovery service that allows IT managers to search for and identify computing workloads across multiple locations, including cloud providers. VMware Network Insight will allow companies to better analyze traffic across their network in private and public cloud environments, while VMware Cost Insight will help businesses optimize their spending across those installations.