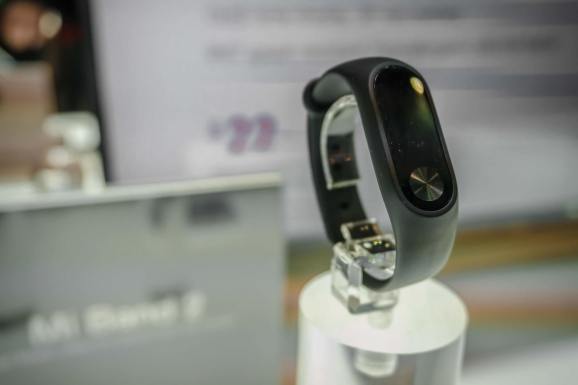 A wearable fitness band made by Xiaomi

At the start of the year, Xiaomi took the wearables crown from Fitbit. In Q2 2017, the Chinese company isn’t letting go, and its two biggest competitors also maintained their close positions: Apple in second and Fitbit in third. (Until 2017, Fitbit was first every single quarter.)

Mobile companies shipped a total of 26.3 million wearables worldwide last quarter. That number is up 10.3 percent from the 23.8 million units shipped in Q2 2016. The latest figures come from IDC, which found that all five of the top companies managed to ship at least a million units. Samsung is notably missing from the list:

As you can see above, Xiaomi gained 0.4 percentage points, thanks to shipping 400,000 more units. IDC noted that the company’s expertise in driving low-cost devices remains unmatched, with the Mi Band lineup being the most popular.

Apple saw the biggest growth year-over-year, up 3.4 points, thanks to shipping an additional 1.1 million units. The Apple Watch Series 1 and Series 2 are now mature products, and the fact the company is still selling more of them ahead of the expected Watch Series 3 debut this quarter bodes well.

Fitbit’s market share meanwhile dropped 11.1 percentage points (from 24.1 percent to 12.9 percent), as the company shipped 2.3 million fewer devices (but still 3.4 million total). The company is in a period of transition with the debut of its first smartwatch.

Garmin slipped 1.0 points to 5.4 percent, while Fossil jumped 2.6 points to 4.0 percent. Both are a far cry from the double-digit percentage shares of their competitors.

Samsung dropped out of the top five this past quarter. The company yesterday unveiled a new smartwatch, fitness tracker, and earbuds at IFA 2017, so it will likely make a comeback next quarter. Still, while the South Korean company dominates smartphones, it has not been able to replicate that track record in wearables.

“Market growth favored new and emerging products in the second quarter,” IDC research manager Ramon Llamas said in a statement. “Smartwatches recorded double-digit year-over-year growth, with much of that increase attributable to a growing number of models aimed at specific market segments, like the fashion-conscious and outdoor enthusiasts in addition to the technophile crowd, lower price points, and a slowly warming reception from consumers and enterprise users alike. Factor in how smartwatches are taking steps to become standalone devices, and more applications are becoming available, and the smartwatch slowly becomes a more suitable mass market product. Meanwhile, we also saw triple-digit growth from clothing and earwear.”

The wearables market remains very small, and companies are still trying to figure out where it’s headed. Vendors are pushing a wide variety of offerings, from fashion accessories to smartphone replacements. The huge amount of data collected behind the scenes is what gives the category immense potential, but is also why consumers remain cautious.