The San Diego airport tapped an experiential design firm, Ueberall International, to create a public artwork on the side of the airport’s new rental car center. Ueberall decided to use E Ink’s Prism technology to create black-and-white “pixels” on gigantic tiles across the 1,600-feet-long facade of the building. Dazzle uses more than 2,000 individual solar-powered titles that can be programmed to arrange themselves into a mutable mural.

Paul Apen, chief strategy officer at E Ink, said in an interview with VentureBeat that the technology for ebook readers scaled up to the large tiles using the same general principles that make ebooks work.

“This is the largest electronic paper installation in the world,” Apen said. 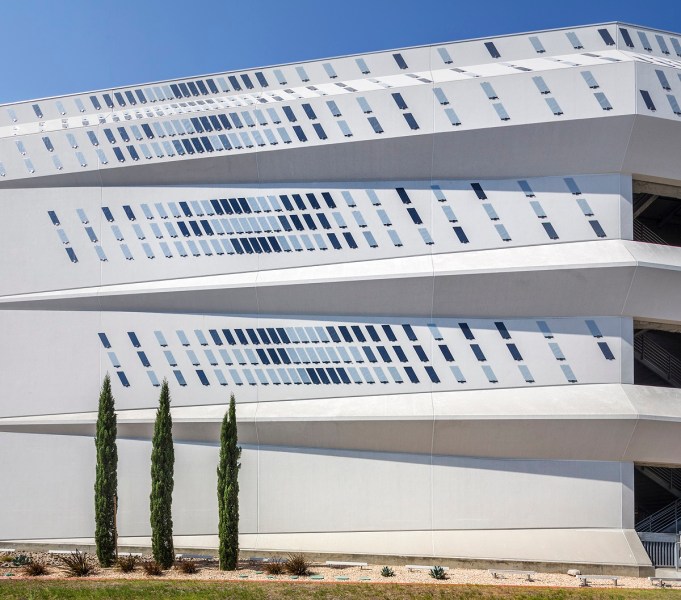 Above: Dazzle has more than 2,000 tiles made from E Ink’s electronic paper technology.

The art will be viewed daily by hundreds of thousands of airport visitors and motorists on the nearby Interstate 5 freeway.

“We use E Ink to bring the building to life,” said Lauren Lockhart, art program manager at the airport, in an interview. “The artists were drawn to it because it was both sustainable and programmable.”

Ueberall International designed the site-specific artwork with inspiration from Norman Wilkinson’s “razzle dazzle” camouflage technique used during World War I to alter the enemy’s ability to accurately perceive ships by visually scrambling their shapes and outlines. The artwork, a nod to San Diego’s heritage as a naval center, is a third of a mile long and six stories high. 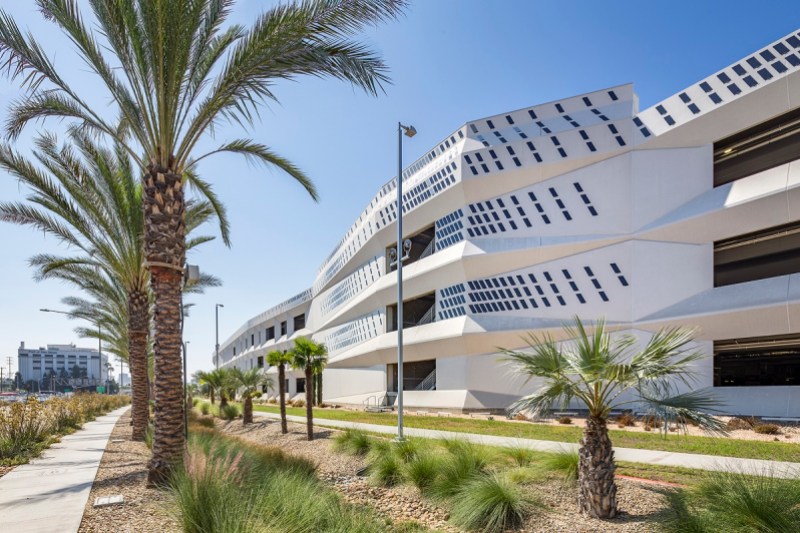 Above: The San Diego airport’s rental car center has a big art installation made from E Ink.

The physical components of Dazzle include e-paper tiles, wireless transmitters, and a host computer. The e-paper tiles are designed in a parallelogram shape and arranged in algorithmic distances to create an overall dynamic visual effect, even when the pixels are still. Each tile has a solar cell for power, electronics for operation, and wireless communication to create each unique animation developed by the artists. The animations
can evoke water ripples, moving traffic, dancing snowflakes, or shifting geometries. Ueberall created 15 different programs to animate the tiles.

Unlike competing technologies like LED lighting, E Ink Prism does not emit light, but reflects ambient light. That means it isn’t a distraction for drivers on the freeway. The visual effect is like movement across the facade.

The installation had a budget of about $875,000, which is a fraction of eligible costs from construction of the $316 million rental car center.

“We are excited and honored to have done it,” Apen said. “It showcases what is possible with e-paper.”