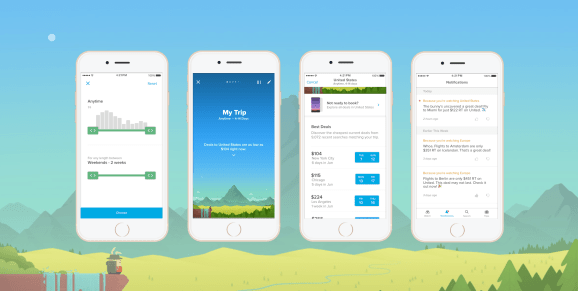 Hopper, a travel app that’s designed to help people find lower prices while on the go, today announced a new feature aimed at getting people somewhere they want to go, even if it’s not where they first intended to fly.

Called Flex Watch, the feature is based on an artificial intelligence algorithm designed to give people destination recommendations that match their preferences. To begin, users input their preferred destination, along with their desired travel dates, level of flexibility, and preferences for other potential locations.

After that, Flex Watch will keep an eye out for flights that it thinks the user would want, and Hopper will send push notifications when it has a match for a particular user. It’s designed to help people find a good price for their vacation without necessarily sending them to the first place they thought of.

The new feature is a tweak on what Hopper and other travel sites usually do, which is allow users to pick out preferred trips and receive recommendations about when they should buy flights. If someone said they wanted to go to New York from November 1 through 5, for example, the original system would have just watched for flights during those times and informed them when the price was expected to be cheapest.

What’s surprising about Flex Watch is that — based on early tests of the feature — people were actually twice as likely to buy recommended travel tickets as they were to book the flights that they initially watched. Buying flights recommended through Flex Watch, users saved on average 40 percent over what they would have spent on the flight they initially searched for.

In order to improve the suggestions from Flex Watch, Hopper will be training its algorithm based on users’ browsing habits within the app. That’s supposed to help it make better decisions and better understand the way users view the world.

That’s one of the interesting insights to come out of Hopper’s work building this intelligent algorithm: The company found that its users saw trips differently based on where they were flying from. For example, people flying out of San Francisco saw Honolulu as more related to other destinations in Asia than did their counterparts in Chicago.

Flex Watch is rolling out to iOS users today and will be available to Android users soon.