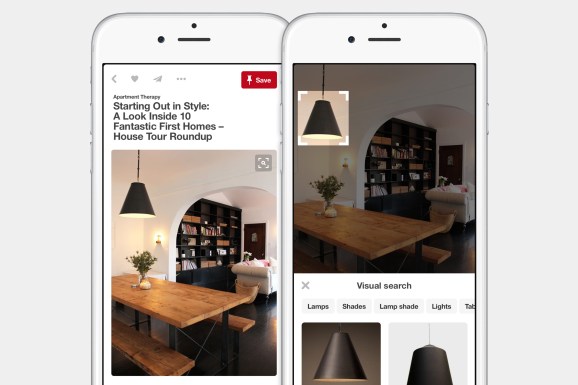 Google announced new badges in its image search in August, just a day after Pinterest updated its app to make the visual search feature front-and-center. This summer’s activity comes a few months after Pinterest announced Pinterest Lens, which allows a user to take a photo of an object with their phone and see related objects in the search results. It also closely follows Google’s May announcement of Google Lens, which uses machine learning to do a real-time visual search using your phone’s camera lens.

Although Google and Pinterest lead in visual search, other ecommerce-focused tech companies have developed visual search as part of their search functions as well. This July, eBay announced its plan to unveil two AI-powered visual search features for its mobile app, which will be coming out later this year. And way back in 2014, Amazon added an image recognition feature as part of its mobile app.

So far, the overwhelmingly obvious use case of visual search is for general ecommerce purposes. Companies want users to be able to search for and eventually purchase products through visual search. Some examples include large tech companies like Google or Pinterest building their own visual search functions, as well as legacy retail companies like West Elm that turn to visual search API/services startups like Clarifai or Slyce.

In a world where a picture is literally worth a thousand words, it’s easy to see how visual search could help a user find a new pair of boots or a new sofa, and how this translates into a new era of search for the consumer. Understandably, general ecommerce, especially fashion and decor, are leading the way. Ecommerce industries like these have the most diversity and visual detail in their products. A study by Slyce shows that 39 percent of its visual search queries were for apparel and 31 percent were for home decor.

Beyond the general use cases that are already pretty familiar, other spaces could benefit from adopting visual search moving forward. Some of these include the discount clothing industry, brick-and-mortar retail, and the fine art market.

In May, Wayfair launched its own visual search tool (“Search with Photo”) to help shoppers find furniture. Part of the strategy behind the new feature is to help Wayfair capture more sales from discount furniture shoppers. These shoppers can now upload photos of high-end furniture onto Wayfair to see whether the online store offers a similar but cheaper alternative.

Companies from the traditional discount clothing industry could also leverage visual search to help consumers find their products. Companies in this space range from retail chains like Designer Shoe Warehouse and Burlington Coat Factory to fast-fashion ecommerce companies like H&M and Forever 21. For the latter category, the products are famously known for being duplications of high-fashion garments that arrive on the shelves faster than the upscale originals. Adopting visual search seems like a natural move to help consumers search for high fashion looks at low prices.

A promotional video for Google Lens released after Google I/O 2017 shows a real-time visual search of a user’s surroundings from their phone. The user points their phone at a storefront and a Google Maps result for the storefront comes up. The result contains information about the particular storefront, such as its name, customer satisfaction rating, hours, etc. — much like the current search results in Google Maps.

The combination of visual search with a map has the potential to draw online consumers to physical storefronts offline. It goes beyond the aforementioned example of real-time point-and-shoot search and can be used to enhance how paid search currently operates. For example, a retail brand could align its paid search to alert a shopper that one of its products is available at a store near them. It’s a way for retail brands to expand their omnichannel strategy to include both online and in-store pickups. It could also allow purely brick-and-mortar small businesses to draw more local foot traffic.

Describing a piece of fine art with keywords can be quite difficult — certainly more of a challenge than describing a blouse or a coffeemaker with keywords. In May, visual search API/services startup Visii launched a visual search tool with Artimage, a digital image licensing platform for the U.K. visual arts space. Artimage’s new visual search tool gives users the ability to comb through 15,000 images of artwork in less than 350 milliseconds to quickly find unexpected gems.

Artimage isn’t the only one in the fine arts space looking to incorporate visual search into its business. Artfinder, an art marketplace startup based in London, has similar ambitions. In the future, it’s easy to imagine a company like Artsy, which catalogs over 1,800 commercial galleries, adopting a visual search tool to help its users discover artwork based on certain visual or stylistic preferences.

The future of search is becoming increasingly visual. The current visual search adoption has primarily been dominated by large tech companies for typical ecommerce user cases. However, these three spaces — discount clothing, brick-and-mortar retail, and fine art — could really benefit from adopting visual search as part of their businesses. That’s worth keeping an eye out for.

Jaja Liao is a recent graduate of Yale and works in mobile partnerships acquisitions at Google.