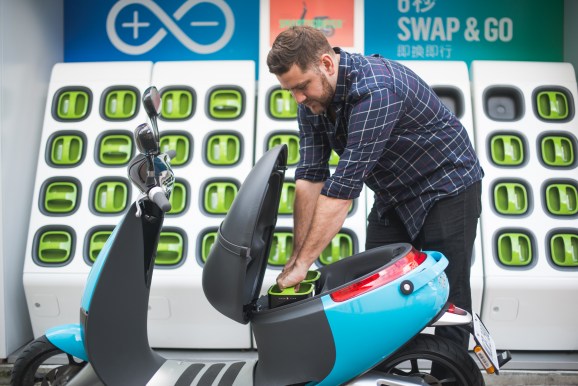 A rider uses Gogoro's battery-swapping station to power up his scooter.

Gogoro, which wants to redefine urban transportation to make it more sustainable, announced today that it has raised a whopping $300 million to further its mission. New investors Temasek, Al Gore’s Generation Investment Management, Sumitomo Corporation, and ENGIE joined existing investors Dr. Samuel Yin, founder of the Tang Prize and chairman of Ruentex Group; Panasonic; and others.

Based in Taipei, Taiwan, Gogoro developed a cloud-powered battery-swapping network called the Gogoro Energy Network. The aim, according to cofounder and CEO Horace Luke, is to build an infrastructure model to power electric mobility.

“The smart connected infrastructure focuses on optimizing the Gogoro Energy Network to make sure that customers always have access to charged batteries,” Luke said in an interview with VentureBeat.

In order to test this model and prove its efficiency, Luke and his team designed and manufactured their own electric vehicle: the Smartscooter, which was launched in Taiwan in 2015. Gogoro has since shipped 35,000 scooters. Users buy a Smartscooter and pay a monthly subscription fee of approximately $25 to use the battery-swapping stations. Once their battery needs charging, they pull it out of the scooter and replace it with a fully charged one at a nearby station.

The startup’s software uses machine learning to analyze the data collected from each swap to calibrate each battery’s charge. A battery will typically last about 68 miles, and Gogoro records approximately 17,000 battery swaps every day.

There are currently two scooter models — the Gogoro 1, launched in 2015, which costs $3,800 and is a fancier, more powerful model; and the Gogoro 2, which recently launched and costs $2,200 for a more family-friendly model.

Gogoro caught the eye of Bosch, which launched a scooter-sharing service of Smartscooters in Berlin and Paris through one of its subsidiaries, Coup. Like bike-sharing services, users rent a scooter and then drop it off when they are done, at which point Coup takes care of the battery swapping.

Luke was very clear about his business model, though. “Gogoro doesn’t consider itself a scooter company, but a technology infrastructure company focused on urban energy management and distribution,” he said. “Our technology will power other vehicles and industries.” It will be interesting to see if and when the startup addresses electric cars, as this will rival Tesla and its charging stations. Luke claims that battery-swapping stations cost a fraction of Tesla’s superchargers.

Gogoro has raised a total of $480 million since its founding in 2011. It will use the new cash to expand geographically, add new verticals, and further research and development (R&D). The startup currently has 1,000 employees.