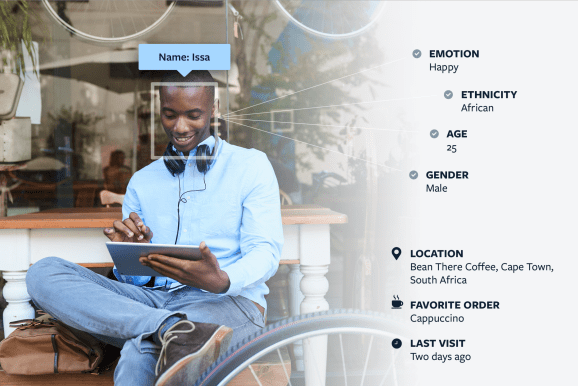 An illustration shows some of the capabilities of Ever AI.

Ever, maker of a consumer app for storing and organizing digital photos, is getting into the enterprise market. Today, the company announced Ever AI, a set of APIs that are supposed to provide a wide variety of visual intelligence capabilities to companies that need them.

The capabilities are available both through a self-hosted API that lets organizations use Ever’s software on their own infrastructure and through a mobile SDK that can bring those models to a smartphone. The latter is important because it allows for fast performance without sending image data to an outside service — all of the processing takes place on-device.

All of this is based on Ever’s massive pool of more than 12 billion consumer photos uploaded through its app by the firm’s 11 million customers. The company has spent a lot of time honing its facial recognition technology for the purpose of building a system that can recognize people in consumer photos, and it’s now bringing those same models to commercial customers.

“We will never, to my knowledge or expectation, let the data out of our hands,” said Doug Aley, Ever’s chief revenue officer. “What we will make sure is that the data will train phenomenal models, and those models are better than anybody else’s, and that is what we’re making.”

The company claims that its model is faster and more accurate than its competitors, including Microsoft, IBM Watson, AWS, and Clarifai. Customers who license Ever’s APIs will be entitled to ongoing updates as the company continues to revise its models in the future.

Ever chose to make its APIs available under a self-hosted license that provides ongoing service, support, and upgrades rather than through a cloud service because its customers wanted the flexibility for unlimited use and the ability to run Ever AI in their own data centers.

In addition to the product news, Ever also announced today that it raised a round of series B funding worth $16 million. The round was led by Icon Ventures, with participation from past investors including Felicis Ventures, Khosla Ventures, and others. Michael Mullany, a general partner at Icon, joined Ever’s board as part of the deal.

The cash will be used for expanding Ever’s offices in San Francisco and Waterloo, Canada.

Building an enterprise service on the back of a consumer product may seem like an odd choice, but the team at Ever has business product chops. Ever is part of Atomic, a combination venture firm and startup studio based in San Francisco’s Presidio district that helps incubate and launch a variety of companies. Several of those businesses are enterprise-focused, which means the Ever team can tap into their expertise.

In addition, a significant portion of the Ever team are alumni of TokBox, a company that provided a platform for voice and video messaging using WebRTC.

Ever AI has the potential to power products like improved multi-factor authentication, since its facial verification technology can let companies ensure that the person who’s looking at a camera matches an image they have on file for the same identity.