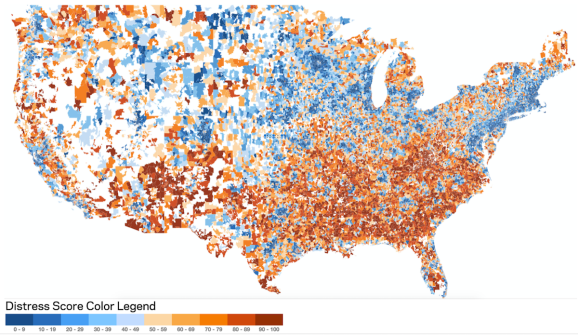 It’s no secret that tech hubs like San Jose and Seattle are home to some of the highest-paying tech jobs in the country — but a new report shows just how stark the economic divide is between tech hubs and the rest of the country.

Additionally, the gap between prosperous and distressed communities is only growing:

Some of the most prosperous cities in the U.S. according to EIG, are tech hubs like San Jose, Seattle, San Francisco, and Austin. Additionally, Sun Belt suburbs like the Phoenix suburbs of Scottsdale, Gilbert, and Chandler are also faring well. Among the 100 largest U.S. cities, none of the 10 most prosperous are located in the Midwest or East Coast.

Meanwhile, the most distressed cities includes many Northeastern and Midwestern cities that formerly served as industrial manufacturing hubs, like Cleveland, Buffalo, Detroit, and Toledo. Not only are these places worse off than their West Coast peers, but they are also worse off than they were at the start of the 21st century. In Michigan, nearly 60 percent of ZIP codes have fewer jobs and businesses than they did in 2000.

“Communities are paying a huge penalty if they did not transition soon enough from a one-industry economy,” says Steve Glickman, the cofounder and executive director of EIG.

Overall, EIG found that the most prosperous communities tend to be younger (many of them are suburban communities that have sprung up next to large major metropolitan areas), have a diversified economy, are close to large institutions of research, have well-maintained physical infrastructure that allows them to transport goods and services easily, and have high rates of immigration.

This explains why one of the cities that is faring the best in the Rust Belt state of Ohio — which has lost 11,000 businesses since 1992 — is Columbus. Home to the Ohio State University, Columbus is attractive for companies that want to be close to young talent.

Another place that’s faring well is the state of Utah. 47 percent of Utah citizens live in prosperous communities, the highest rate of any state. Like other prosperous cities, Utah has a young population — the median age is 30.5 according to 2015 U.S. Census data — and the state has been buoyed by a growing tech community in the Provo-Salt Lake City area.

As for rural communities, the path toward economic prosperity is more challenging, given that they have a smaller population. Lettieri says that it’s even more vital for rural communities to focus their efforts on supporting homegrown businesses — rather than poaching a large tech company — given that the loss of a major employer can have a more devastating affect on a smaller town that has trouble attracting large businesses.

“Success in a rural area isn’t going to look the same as success in a major tech hub,” Lettieri says. “But the rural areas that tend to the the most successful today tend to be those that economically and in terms of their social capital are most strongly linked to bigger population areas.”