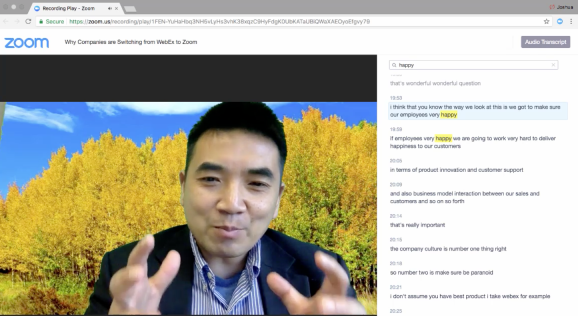 Companies using Zoom for videoconferencing will soon be able to get automatic transcripts of their conversations, thanks to a new feature announced today. Called Smart Meetings, it’s supposed to prevent time being wasted taking and sharing meeting notes from calls.

Instead, the system will use machine learning to understand who’s speaking and when and then take down what they’ve said for posterity. Customers will be able to scroll back through the transcript, click on words, and get automatically directed to that portion of the video playback to hear what people actually said.

That will be useful in the event that Zoom’s new feature isn’t all it’s cracked up to be. Automated transcription systems aren’t perfectly accurate at this point, though they’re usually good enough to capture the gist of what was said and help refer people to the correct section of the tape.

The company isn’t building its voice recognition capabilities in house, however. Zoom cofounder and CEO Eric Yuan said that his firm is working with a startup that provides the feature, rather than spending the time creating it themselves.

In the future, Zoom plans to introduce additional AI features to help companies get the most out of meetings. Yuan said that the firm is looking into providing feedback about when someone is dominating the conversation and using computer vision to figure out when people have checked out.

AI isn’t the only emerging technology the videoconferencing startup is working with. The company partnered with Meta to bring its capabilities into augmented reality using that startup’s soon-to-be released headset. It’s a move that helps put Zoom and Meta in closer competition with Microsoft HoloLens, which offers telepresence videoconferencing through a Skype app.