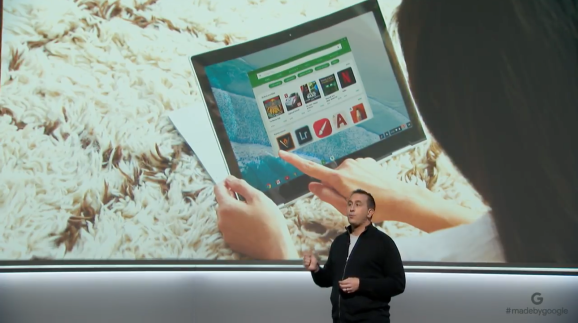 There’s a new flagship Chromebook in town. Google unveiled a new Pixelbook at its hardware event today, taking a swing at Microsoft’s Surface lineup with a laptop that transforms into a tablet.

Users will be able to use the touchscreen like a pressure-sensitive tablet with an optional Pixelbook Pen accessory. The new laptop sports a 12.3-inch display and Intel Core i5 or i7 processors, depending on the model users choose. For storage, users will be able to buy models with 128GB, 256GB, or 512GB of capacity for their files. It’s light, too — weighing in at around 1 kilogram (2.2 lbs).

Google’s AI assistant is built in as well, so customers can type and talk with it for assistance or to control media on their laptop. There’s a dedicated key to invoke the Assistant, so people don’t have to say “OK Google” in the middle of a crowded room. The Pen also doubles as a way to ask the Assistant for help with what’s on the screen. Pressing the Assistant button and circling a region on the screen will let a user get more information about whatever’s selected.

Wacom, the company that makes popular professional drawing tablets like the Cintiq, worked with Google to create the Pixelbook Pen, which costs an additional $99. The Pixelbook also has machine learning-based handwriting recognition built in.

Charging the Pixelbook will require USB-C, and people will be able to use the chargers they already have for their Google Pixel phones to power the laptop.

The Pixelbook feels reminiscent of the convertible Windows devices, like Microsoft’s Surface lineup, that have seen growing popularity over the past couple years. It has a hinge that lets the screen rotate all the way around the keyboard, similar to the Lenovo Yoga series of Windows laptops.

This new hardware might be what it takes to attract people to Google’s computing ecosystem. The company has been steadily improving Chrome OS over the course of its lifetime, with the aim of making its homegrown operating system more feature-rich.

Chrome OS recently gained support for running Android apps alongside web apps, which should provide users with a larger range of applications and functionality. The Pixelbook’s touchscreen should help make that feature more useful, so users can tap into Android apps in the same way that they would use them on a phone or tablet.

Google is working with Android app makers to bring special features from their apps to the Pixelbook. For example, the company is working with Snap on special Snapchat functionality, according to Google hardware product director Matt Vokoun.

All that functionality comes with a rather steep price, though — the base model Pixelbook starts at $999, which is more expensive than many Chromebooks, which usually top out around $600.

The Pixelbook will be available for preorder today and will start shipping October 31.