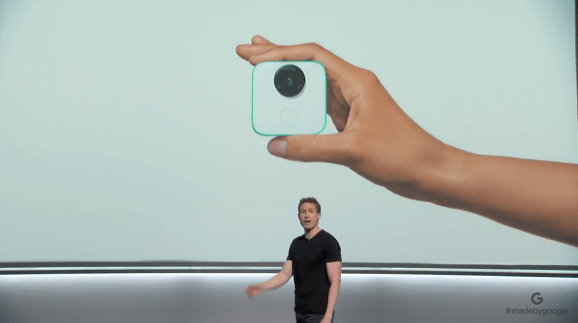 Google has announced a new add-on for the Pixel 2 camera called Clips. While Google says it works best with its Pixel phones, the add-on is also compatible with Samsung’s Galaxy S7 and S8 devices, as well as Apple’s iPhone (6 and up).

The camera is hands-free and works like a photographer you’ve hired for an event. The AI captures moments for you, and then you decide how to use the images later when you can look through them. An AI engine snaps photos when you are not even looking or paying attention.

It has a high-performance lens, image sensor, and shutter button.

Machine learning behind the lens takes photos for you. It helps you get shots you couldn’t get before.

You can automatically save the images and even make movies out of the images. Each photo capture lasts several seconds.

According to Google, “Google Clips learns to recognize familiar faces. The more you’re with someone, the more it learns to capture clips of them. It can also pick out pets like cats or dogs.” The camera uses something called Machine IQ, which (per Google) is “a machine learning algorithm that’s smart enough to recognize great expressions, lighting and framing.”

The idea of a wearable camera is not new, but Clips can also just sit in a room or attach to a wall to capture images without having to be worn on your body or even controlled using the shutter button.

It has 16GB of storage on the camera itself. It won’t require an Internet connection. Clips uses Wi-Fi Direct to transfer images to the phone. The lens captures in a 130-degree field of view at 15FPS.

A new feature called lens occlusion detection alerts you when the lens is blocked. The 2-inch camera lasts three hours and weighs 2.1 ounces.