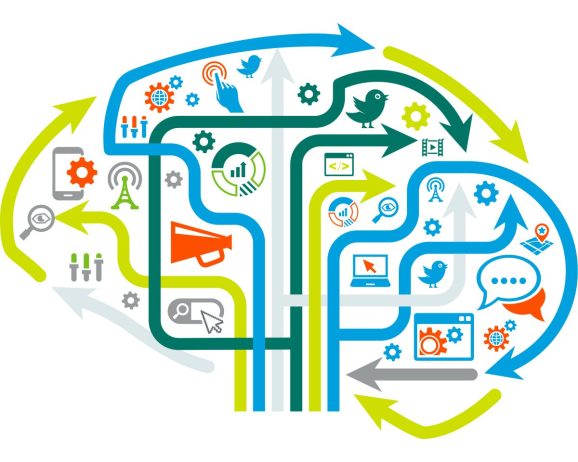 Artificial intelligence is spreading around us. Be it targeted advertising on social media, filtering applicants for a job, determining air ticket prices, controlling your central heating through voice recognition, creating cultural output, or regulating traffic flow, AI is performing an increasing number of tasks in human life.

By the end of 2017, Elon Musk confidently predicts, a driverless Tesla car will be able to travel safely coast-to-coast across the United States with no human input. Social robots — AI-based machines that live with us — may routinely perform many domestic or care tasks within a decade. And by 2050 it’s widely estimated that we will have progressed beyond these specific applications and achieved artificial general intelligence (AGI).  AGI is part of the so-called Singularity: the point at which computers can outperform any human at any cognitive task, and where human-computer integration is commonplace. What happens after that is anyone’s guess.

Benign scenarios include humans having computer parts within their bodies to help process data more quickly. The “neural lattices” envisaged by some in AI would act as a kind of extra cortex on the outside of our brains, linking us to electronic devices with speed and efficiency. That would be a significant upgrade on the machine parts — electronic pacemakers and titanium joints — in today’s “primitive cyborgs.”

Apocalyptic variations on the future of AI often focus on military and defense applications, with the concept of fully autonomous weapons being particularly controversial. A weapon system that could search for, identify, select, and destroy a target based on algorithms and learning from past security threats — with no real-time human input whatsoever — is a pretty terrifying concept. These visions of an AI-dominated human future approximate a sci-fi dystopia reminiscent of The Terminator.

The destruction of humankind may be some way off, but the warning signs today around ethics in AI are already ringing alarm bells. Just in the past month, machine learning algorithms have taken flak for proactively suggesting bomb-making components to Amazon shoppers, perpetuating gender inequalities in employment advertising, and spreading hate messages through social media. Much of this misfiring is due to the quality and nature of data that the machines use to learn. Fed biased data by humans, they will reach flawed conclusions. Such outcomes today beg serious questions about ethics for governance of algorithms and broader AI mechanisms in daily life.

Recently, a young American man with a history of mental health difficulties was turned down for a job based on the filtering of his responses to a personality questionnaire by an algorithm. He believed he had been unfairly — and illegally — discriminated against, but because the company did not understand how the algorithm worked, and employment law does not currently cover machine decision-making with any clarity, he had no recourse to appeal. Similar concerns have been voiced over China’s algorithm-led “social credit” scheme, whose pilot last year gathered data from social media (including friends’ posts) to rate the quality of a person’s “citizenship” and applied it to decisions such as whether to give that person a loan.

Need for AI ethics and laws

Clear systems of ethics for AI operation and regulation are needed, particularly when government and corporate use prioritizes factors like acquisition and maintenance of power, or financial profit, in the overarching goals driving algorithms. Israeli historian Yuval Harari has discussed this with respect to driverless cars and a new AI version of philosophy’s Trolley Problem. Innovations like MIT’s Moral Machine attempt to gather data on human input to machine ethics.

But ethics isn’t the only domain where questions around AI and human well being have been raised. AI is already creating a significant emotional impact on humans. Despite this, emotion has been largely neglected as a topic of research in AI. A casual look at the Web of Science academic database throws up 3,542 peer-reviewed articles on AI in the past two years. Only 43 of them — a mere 1.2 percent — contain the word “emotion.” Even fewer actually describe research on emotion in AI. When thinking about the Singularity, it seems that emotion should be addressed when considering cognitive architecture in intelligent machines. Yet 99 percent of AI research seems to disagree.

When we talk about emotion in AI, we are referring to several different things. One area is the ability of machines to recognize our emotional states and act accordingly. This field of affective computing is developing quickly through sophisticated biometric sensors capable of measuring our galvanic skin response, brain waves, facial expressions, and other sources of emotional data. Most of the time now, they get it right.

Applications of this tech range from cuddly to downright sinister. Companies can get feedback on your emotional response to a film and try to sell you a related item in real time through your smartphone. Politicians might craft messages guaranteed to appeal emotionally to a specific audience. Less cynically, a social robot might tailor its response to better assist a vulnerable human in a medical or care setting, or an AI-based digital assistant might choose a song to help lift your mood. Market forces will propel this field, widen its reach, and refine its abilities.

But how do we feel about AI?

The second area of emotion in AI — and one where less is known — is the human emotional response to AI. Humans seem to relate to AI as we do with most technology, attributing personalities to inanimate objects, imbuing appliances with intentionality, and generally projecting emotions onto the tech we use (“It’s pissed off at me, that’s why it’s not working”).

This is known as the Media Equation. It involves a form of doublethink: We understand cognitively that the machines are not sentient creatures, but we respond to them emotionally as if they are. This may stem from our fundamental human needs to relate socially and bond emotionally, without which we become depressed. We are driven to relate to people, animals, and, it turns out, even machines. Sensory experience is a huge part of this bonding drive and its reward mechanism, as well as a source of pleasure in its own right.

When the experiences of bonding and belonging are absent in our environments, we are motivated to reproduce them through TV, film, music, books, video games, and anything that can provide an immersive social world. This is known as the Social Surrogacy Hypothesis — an empirically backed theory from social psychology — and it is starting to be applied to AI.

Basic human emotions are in evidence even with disembodied AI: happiness at a spontaneous compliment from a digital assistant; anger at the algorithm that rejected your mortgage application; fear at the prospect of being carried in a driverless car; sadness at Twitter’s AI-based refusal to verify your account (I’m still nursing a bruised ego from that one).

We are the robots

Emotional reactions are stronger with embodied AI, which often means robots. And the more a robot resembles a human, the stronger our emotional response to it. We feel drawn to bond with anthropomorphic robots, express positive emotion towards them, and empathize and feel bad when we see them harmed. We even feel sad if they reject us.

Interestingly though, if a robot is almost completely humanlike — but not perfectly human — our evaluation suddenly drops and we reject them. This is known as the “uncanny valley” theory, and it leads to design decisions to make robots less human-looking rather than more, at least until we can get robots looking exactly human.

AI is now utilizing haptic technologies — touch-based experience — to further the emotional bonds between humans and robots. Perhaps the most famous example, Paro the fluffy seal, has been found to be beneficial for a range of groups in care settings in different countries.

Social and emotional robots have a number of potential applications. Some of these include care for the elderly to promote autonomous living; help for people experiencing isolation; and assistance for people with dementia, autism, or disabilities. Touch-based sensory experience, which is increasingly being integrated into immersive technologies like virtual reality, is a part of this.

In other domains, AI may take over routine domestic chores or tasks like teaching. A survey of over 750 South Korean children ages 5 to 18 found that while most of them had no problem accepting courses taught by an AI robot in school, many had concerns about the emotional role of the AI teacher. Would the bot be able to counsel, or relate emotionally to the pupil? Nevertheless, over 40 percent were in favor of replacing human teachers with AI robots in the classroom.

Is there anything we’re missing?

As Harvard psychologist Steven Pinker has said, synthesized experiences such as those of social surrogacy described above allow us to deceive ourselves. We are not having the experience itself, but we trick our brains into believing that we are so that we feel better. However, the facsimile is not as good as the real thing.

Clearly, people can experience genuine emotions from interactions with AI. But would we be missing something in a not-too-far-off world populated by driverless cars, disembodied assistants, robotic teachers, cleaners, and playmates?

The scenario is reminiscent of Harry Harlow’s famous experiments, where orphaned monkeys reliably chose a tactile “mother” with soft fur and no milk over a cold wire-mesh “mother” that dispensed milk. Could we be setting ourselves up with everything we could want technologically, only to realize that fundamental human needs of bonding and pleasures of real-world sensory experience are absent? For luxury in the future, will we seek the social equivalent of artisanal produce versus mass-produced junk food: authentic sensory experiences and contact with real people rather than robots?

The answer is that right now, we don’t know. But the fact that 99 percent of AI research is not paying attention to emotion suggests that if emotion does play a greater role in AI, it will either be as an afterthought or because emotional data enables more power and money to be generated by the AI-operated device and its employer.
A digital humanist agenda might help us remember that, as we hurtle towards the Singularity and convergence with computers in and around our bodies, we shouldn’t neglect our ancient mammal brains and their need for emotional bonds. The OpenAI project is a step towards this, aiming to make the benefits of AI available to all.

Let’s take it a step further and consider emotional wellbeing in AI too. Who knows where that might take us?

Dr. Chris Merritt is a writer and clinical psychologist. The article was coauthored with Dr. Richard Wolman.